Sha’Carri Richardson is set to make her Olympic debut in Tokyo following an impressive performance at the U.S. Olympic Track and Field Trials at the new Hayward Field in Eugene, Oregon.

The 21-year-old, wearing her signature long orange hair and multi-colored nails, shot to the 100 meters finish line with a time of 10.86, 0.13 seconds faster than second-place finisher Javianne Oliver. However, it’s what she did afterward that made her supporters even more emotional.  Once the race wrapped up, Richardson quickly ran up to the stand, to embrace her grandmother, Betty Harp.

She expressed great gratitude toward Harp, whom she said helped shape her, adding that the time she spent holding her grandmother meant more to her than the actual race. “My grandmother is my heart. My grandmother is my superwoman, so to be able to have her here at the biggest meet of my life and being able to cross the finish line and run up the steps knowing I’m an Olympian now, it just felt amazing,” she explained.

The Texas native told NBC reporters that her family dynamic was a “very, very, very confusing, sensitive topic” before revealing that her mother had recently passed away but declined to go into details regarding their relationship.

“That’s not anything I want to talk about, so I’m not going to get too much into details,” she explained. “But what I will say is I am grateful for her giving me life, bringing me into this world.”

The athlete is the youngest of Team USA’s three 100 meters qualifiers and poses as the youngest medal threat in the Olympic field. She told reporters that she actually uses her age as “an intimidating fact.” She added, “If you’ve been doing this and I step on the scene, I’m letting you know I respect you for you putting on for our sport, but at the end of the day, when we get on this line, what you’ve been doing, you have to do that against me.”

Jamaica’s Shelly-Ann Fraser-Pryce, who became the fastest woman alive earlier this month — the late track star, Florence Griffith-Joyner still holds the record for the fastest of all time — appears to be the one to beat.

Meanwhile, many have already begun to compare Richardson to Griffith-Joyner, who also displayed a unique sense of style while on the field with her long hair and long nail designs. “My girlfriend actually picked my color,” Richardson said Friday. “She said it, like, spoke to her, the fact that it was just so loud and vibrant, and that’s who I am.”

Richardson is looking like the American fan favorite to win a gold medal at the upcoming Games. The U.S. has not won Olympic gold in the women’s 100 since Gail Devers claimed her second accolade in 1996. Richardson next will be competing in the 200 meters on Thursday, June 24. She has the fastest qualifying time in the field with 22.11 seconds. 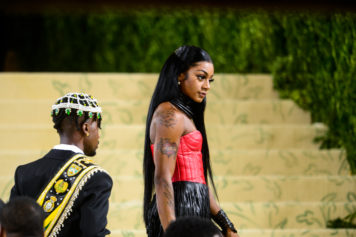 ‘Her Mouth Run Faster Than Her Feet’: Sha’Carri Richardson Sounds Off Once More on Haters Who Critique Her