Olympic swimmer Simone Manuel talked about the challenges involved with being one of the few Black swimmers for USA Swimming and how the national conversation about racial equality has made it easier for her to speak on racial issues.

Manuel, 23, is the first Black woman to win an individual medal in swimming at the Olympics by taking the gold in the 100-meter freestyle at the 2016 Rio Games. She also became the only woman to win seven medals at a single World Championships, something that she accomplished in 2019 in South Korea.

Those victories, however, didn’t keep her from nearly walking away from her sport because she often felt secluded.

“It’s the climate of the world we live in,” Manuel told CBS, which reported that only 1 percent of USA Swimming membership is Black. “Sadly, there still is racism that exists. … And to know that if I were to quit, I wouldn’t have reached the goals that I have or inspired others to dream beyond traditional assumptions of stereotypes. … [Swimming] definitely has a long way to go when you’re talking about diversity and inclusion.”

The Texas native is a known supporter of diversity and inclusion, not just in her chosen sport but overall. That was evident in 2018 when she signed with swimwear company TYR in her first professional sponsorship deal and had an inclusion rider added. The move was unprecedented for an athlete sponsorship deal.

The rider ensures that those groups who have been historically underutilized are given an opportunity to work on Manuel’s TYR projects.

The gold medalist has also been posting messages about racism and social justice on social media since George Floyd died in May.

In addition, being one of the few Blacks in her sport, Manuel’s coach Greg Meehan recently told Sports Illustrated that she’s often the sole person on her team to answer questions about race or social justice issues.

It’s something that Manuel never minded doing but finds it easier these days to express herself on issues of race because of the protests that have been happening.

“In the past, I’ve felt like I had to filter what I say in order to not offend people or put myself in a position where I’d possibly be targeted for what I’m saying,” Manuel explained. “But now that people are listening, it’s a little bit easier for me to stand bold and firm in what I’m saying and not filter how I’m feeling about these situations, because they’re important conversations that all of us need to have.”

The Tokyo Olympics were suspended in March because of COVID-19 and are slated to begin on July 23, 2021. Manuel said while the postponement is “bittersweet,” she believes there are other things to focus on, considering there’s a pandemic and a fight for racial equality happening simultaneously.

On top of Manuel’s battle for more inclusion in swimming, she’s also been encouraging other Black women to get into her sport, even as she understands why there’s such a lack of diversity in it.

“I think, through it all, what I learned was Black people can swim, we just weren’t given an equal opportunity to be successful in the sport,” she said in a separate interview with People. 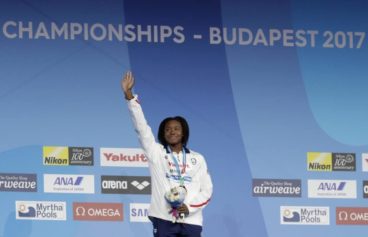 Simone Manuel Acknowledges Her Role in Tradition of Activist Athletes