Toya Johnson seems madly in love with her fiancé Robert “Red” Rushing and fans are happy about it.

On Thursday, the T.I. & Tiny: Friends & Family Hustle” star shared a simple and sweet post about Rushing. They appeared to be filming for the show’s new season with their green screen looks. The couple color coordinated by wearing black attire.

Johnson wore a curve-hugging, black sleeveless dress and her beau donned a black Givenchy button-up. The couple posed for a cute picture together in her post and in a separate video, Johnson showed Rushing right by her side.

She added in her caption, “I ❤️this guy.”

The mother of two’s followers gushed over the post and the pair’s romance.

“I love him for u , u deserve a phenomenal man ! 😍 @toyajohnson It’s obvious that he loves you! You glow differently now…prime example of what happens when you’re loved the way you deserve to be loved! ❤️”

“Toya y’all hit the jackpot when y’all found each other we love him for you 💕#rushingdowntheaisle 💍 I can’t wait until you get married!”

“Beautiful couple @toyajohnson I’m so happy for you boo you found your prince 😍. You guys deserve all the love”

Johnson and Rushing apparently began dating around 2017, a few months after she divorced Mickey “Memphitz” Wright in 2016. It’s unclear how the couple met.

The Weight No More founders share 2-year-old daughter Reign Rushing, whom they welcomed in February 2018. Red recently dedicated a sweet post to his bride-to-be for Valentine’s Day. He posted an engagement photo of them on Instagram and wrote, ” I love when you smile at me, but mostly when we smile together. I love you Mrs. Rushing. Happy V-Day. #TheLoveOfMyLife #Rushing”

Johnson responded with a post of her own that said, “Happy Valentine’s Day my love!! ❤️”

The twosome got engaged last November, but details about their wedding are unknown. The proposal will more than likely be shown on the upcoming season of “Friends and Family Hustle.” The premiere date has yet to be confirmed, but according to Deadline, the show will air sometime this year. 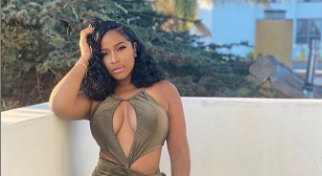