BET founder Bob Johnson piled on the praise for President Donald Trump this week, crediting the POTUS for doing “positive things” for the economy that, in turn have greatly impacted the Black community.

Appearing on CNBC’s “Sqwak Box” on Thursday, Johnson said the trend for African-Americans has continued to be on the rise thanks to Trump’s economy. 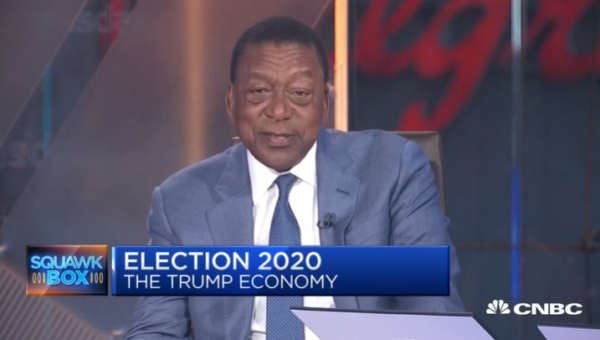 Johnson, a self-described centrist, threw his support behind then candidate  Hillary Clinton during the 2016 election but has since become a fan of the Trump economy. He made headlines earlier this year, and even received a shoutout from Trump himself, after saying he believed the president’s tax cuts helped stimulate the economy.

“I think business people have more confidence in the way the economy is going,” he told CNBC in July.

In that same interview, Johnson lamented that the Democratic party had become a too liberal for his liking.

“The party in my opinion, for me personally, has moved too far to the left,” Johnson added. “And for that reason, I do not have a particular candidate (I’m supporting) in the party at this time.”

The media mogul argued that if a Democrat is looking to beat Trump, he/she better not wait too long to “move to the center” of the political spectrum. On Thursday, he doubled down on his refusal to names which candidate(s) he’s rooting for in the 2020 presidential election. What Johnson did say, however, is that it’s in Black folk’s best interest not to get attached to one particular party.

African-Americans have historically voted Democrat, but the businessman thinks it’s time they start voting for their “permanent interests.”

“What the Congressional Black Caucus said in 1971 should be the philosophy for African Americans today: ‘No permanent friends, no permanent enemies, just permanent interests,’” he told the outlet.

By urging both parties to address the interests of Black voters, Johnson argued that “we can be the balance of power.”