Conservative commentator Shermicheal Singleton became impassioned Tuesday in calling BS on Republican figures’ claims that their party “never disrespected” the office of the president when Barack Obama was in office.

In a panel discussion on MSNBC, Singleton and others weighed in on House Democrats’ resolution to condemn President Donald Trump‘s racist “go back” tweets aimed at four congresswomen of color. Host Chris Matthews then rolled a clip of House Minority Whip Steve Scalise (R-LA) saying Republicans never disrespected Obama, but rather voiced their disagreements “respectfully.” 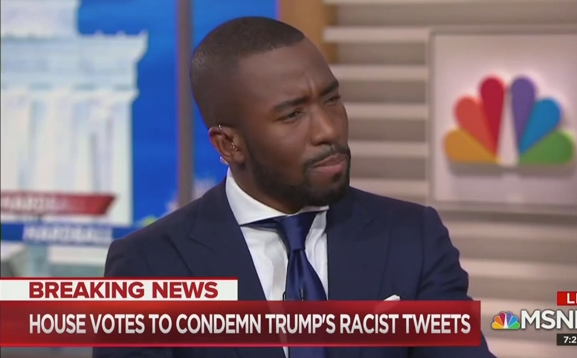 “Oh, hell no!” said Singleton, reacting to the video. “They’re not clean, Chris. Excuse my language. This really angers me. I’m a conservative, but there was a huge sense of pride for me to see Barack Obama get elected.”

Singelton, a Vox Media contributor, recalled being in high school and organizing a bus so that he and fellow students could go see Obama speak.

“I didn’t care about the politics,” he said. “It was just amazing for me as a young Black kid to say, “oh my God, look at this Black guy. He’s president!’ And so you have Republicans who are sitting here saying they never — they disrespected Obama at every step of the way.”

“You don’t have to like the policies, but why in the hell do you have to disrespect the man merely because of how he looked? How he looked,” Singleton added.

Matthews then played a montage that poked a massive hole in Scalise’s claims. In one video, GOP Rep. Joe Wilson shouts “You lie!” during one of Obama’s State of the Union addresses. Another showed Rep. Mark Meadows (R-N.C.) telling a crowd that it was time to send Obama “back to Kenya or  wherever it is” he’s from. In an interview, then-Rep. Doug Lamborn (R-Colo.) said he didn’t even want to be associated with the former president.

“It’s like touching a tar baby and you’re stuck and you’re part of the problem now,” Lamborn said.

Back in 2016 a HuffPost journalist compiled a comprehensive clip of the numerous incidents of conservatives disrespecting the office and Obama.