Lil Yachty is sick and tired of people telling him that he’s overweight, and he responded by posting a couple of shirtless photos to prove otherwise.

The fat-shaming isn’t entirely new for Yachty, but it’s been pretty consistent, especially under some recent photos he posted. There was one picture in particular that showed him posing in a white T-shirt in New York City that people dissed.

There’s was also someone who said the 21-year-old wasn’t necessarily big but would benefit from some consistent gym time.

“Man if you don’t get Yo old ass back up an do some lifting u gon get chubby like a wombat,” that person wrote.

In response, the “Do Not Disturb” rapper posted a photo of himself in green sweatpants to show that he’s more svelte than chubby. “Y’all buggin who fat,” wrote Yachty.

Then he shared a pic of himself in red sweatpants and explained why he may appear overweight to some people. Yachty also expressed frustration about all the fat-shaming he’s getting.

But unfortunately for the rapper, it didn’t seem like his posts generated many compliments or changed a lot of minds. In fact, the photos only seemed to spark more harsh criticism, and people took the opportunity to post jokes.

“He just wide,” someone wrote.

“You not fat boo but the way your body set up you 2 cheeseburgers away,” another person weighed in.

“He shaped like Tracy Morgan,” a third person stated. 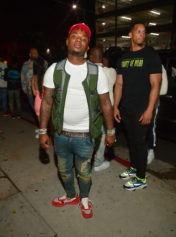