Social media went into a frenzy this past weekend after “Growing Up Hip Hop” star Angela Simmons posted an image of herself with a “mystery man.”

Well, the mystery man, whose name is Charles Johnson, turned out to be her 2-year-old son’s godfather and close friend of her ex-fiancé Sutton Tennyson, who was shot and killed in November 2018. Fans, however, assumed Johnson was Simmons’ new boo, which led to a huge discussion in her comments. 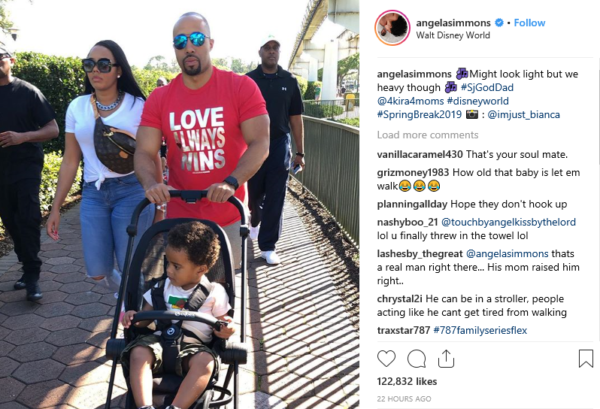 The “GUHH” star took to Instagram on Sunday evening and shared a picture of herself, Johnson and her toddler Sutton Joseph Tennyson spending the day together at Disney World. Simmons and Johnson walked side by side as the founder of “4Kira4Moms” pushed baby SJ in a stroller.

“🎶 Might look light but we heavy though 🎶 #SjGodDad @4kira4moms #disneyworld #SpringBreak2019 📸,” Simmons captioned the image.

Fans immediately bombarded the reality star’s comments, speculating that her and Johnson were dating.

“You two look great together,” one fan commented underneath her image. “You owe no one an explanation for how you live your life. If there is even a drop of interest explore it. The mystery man is handsome 😎.”

Another added, “Who’s her new man? Is that’s your soul mate? I love his shirt & often say that ❤️ always wins 👍🏽.”

Someone else commented, “Dang I was hoping her n Romeo would get together but she dating a new guy now. He fine tho 😍.”

Other fans set the record straight about Simmons and Johnson’s relationship.

“This his her child’s God Father,” one person wrote. “Please stop spreading unnecessary dating rumors. Like the picture and keep scrolling.”

Someone else added, “Charles is Judge Hatchett’s son. He lost his wife Kira during childbirth please be respectful ya’ll never read the caption! He was also good friends with Angela son’s father. He’s stepping as the god father in SJ’s life. People think they know everything 🤦🏾‍♀️.”

JoJo Simmons, Angela’s older brother, also chimed in the comments seemingly assuring fans that the mother of one and Johnson were not dating.

Angela’s last public relationship was with Tennyson, which ended in 2017. The couple got engaged in April 2016 and welcomed their son Sutton Joseph Tennyson a few months later in September. However, the two called it quits the following December after the Pastry shoe line designer said she became unhappy.

Rumors have been circulating that Angela is allegedly dating Brooklyn Nets NBA player Allen Crabbe. Angela and her brother JoJo were spotted at one of the shooting guard’s recent games, and the reality star was seemingly seen riding out with Crabbe afterward in his car. They also posted each other on their Instagram stories as they jammed to “Spend the Night” by singer Rahsaan Patterson.

#PressPlay Well well well… #angelasimmons definitely has a type.. #allencrabbe can we finally put the #romeomiller and Angela ish to bed… they’re not going to hook up! PERIODTTT!

‘I Couldn’t Believe I Was That Girl’: Angela Simmons Opens Up About Her Personal Experience Being In an Abusive Relationship