A recent photo post of “Growing Up Hip Hop” star Angela Simmons spiraled out of control after folks advised her and Romeo Miller to make their relationship “official.”

Simmons took to Instagram on Sunday, Jan. 27, and shared an image of herself in a white cropped top, a pair of distressed denim jeans and a pink faux fur jacket. She accentuated her outfit with a pair of over-sized hoop earrings and rose-gold pumps.

“Pinking of you 💕🥰 #NycNights,” the 31-year-old captioned the picture. Folks instantly thought Simmons’ Instagram caption was a cryptic message to her long-time friend and alleged love interest Romeo Miller. The duo have expressed their romantic interest in one another over the past years but made the decision to remain friends.

Fans are now urging Simmons and Miller to ditch their friendship and get together romantically.

“Look Romeo she’s Pinking of You 🤣,” one fan wrote. “Stop playing and scoop her up before it’s too late.”

Another added, “I hope of you pinking of Romeo ya’ll  need to quit faking with each other lol.”

Another fan commented, “@Angelasimmons you are beautiful! Please quit playing with @romeomiller! Please don’t make the mistake that so many of us make-letting a good man get away! While you playing somebody else is gonna come and swoop him up😍!!”

In July 2018, rumors flew that Simmons and Miller were an item after the fashion designer wrote on her Instagram that she was extremely happy as she was sending a shout-out to her “partner” Miller. They both were also spotted in New Orleans for the 2018 Essence Music Festival.

“I’ve never smiled so much and meant it 😁 #ThankYouGod #GUHH swipe right for picture with my partner @romeomiller 🎥,” Simmons wrote. 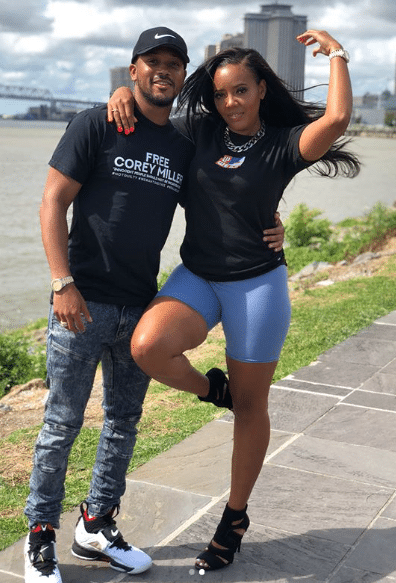 Nonetheless, in December, Miller confirmed to Page Six that he and Simmons were just friends and nothing more.

“We’re good friends and we got good chemistry, but I am also about respect,” the rapper said.

He told the outlet that in wake of the death of Simmons’ ex-fiancé Sutton Tennyson, who was shot and killed in November, 2018, he was putting his romantic interest in Simmons on the back burner.

“She lost somebody, and she definitely got to grieve,” Miller added. “I am not a dude to take advantage of that. … We cool though. That is one of my good friends. I think people just want to see people like that together in general. But you can’t rush that — whatever happens, happens.”

‘I’m Cheesing Like I Know Them Personally’: Fans Gush Over Angela Simmons and Yo Gotti Cuddled Up Courtside Pics

Angela Simmons’ Dating History: Who is She Dating in 2023?