CHICAGO (AP) — Several black motorists testified Friday that the white officer who fatally shot Laquan McDonald used racial slurs and excessive force during traffic stops in the years before the 2014 killing that was captured on a shocking dashcam video.

Jason Van Dyke was in court to be sentenced for second-degree murder and 16 counts of aggravated battery. He faces at least several years in prison, if not decades, after being convicted in October. 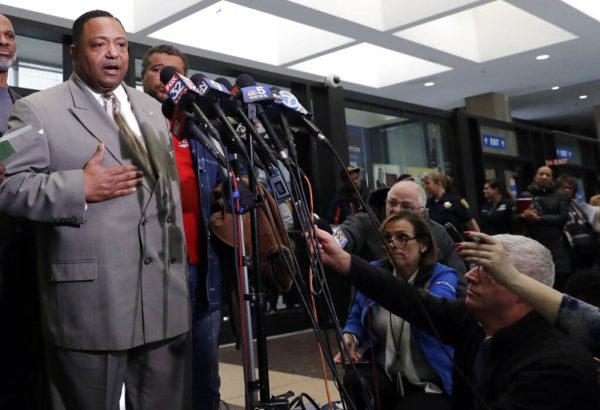 Vidale Joy said Van Dyke used a racial slur after pulling him over in 2005 and at one point put a gun to Joy’s head. He said Van Dyke “looked infuriated” and seemed “out of his mind.” Under cross-examination, Joy acknowledged that he did not allege Van Dyke use a slur in his first accounts of the stop.

Another witness, Ed Nance, struggled to maintain his composure as he looked across the room to identify Van Dyke. Testifying about a 2007 traffic stop, he said the officer cursed and slammed him on the car’s hood, grabbed him by the arms and pulled him to the squad car.

Allegations of racial bias were not a focus at Van Dyke’s trial last year, but prosecutors highlighted the accusations now in a bid to persuade the judge that Van Dyke deserves a stiffer sentence.

A relative of Laquan McDonald read a statement from the slain teen’s perspective, saying Van Dyke killed him without provocation.

The Rev. Marvin Hunter read a letter written in the voice of his grandnephew. It said McDonald had a tough childhood but was turning around his life when Van Dyke shot him 16 times during the October 2014 confrontation on a South Side street.

The defense is also expected to call witnesses to speak on the former officer’s behalf.

Because Illinois judges are typically required to sentence defendants for the most serious crime of which they are convicted, attorneys made arguments about the severity of the offenses, as governed by the state’s complex guidelines. Judge Vincent Gaughan’s decision on that point will help determine the sentence.

The defense wants Van Dyke to be sentenced primarily for the second-degree murder charge, partly because it carries a shorter mandatory minimum prison term of four years. Prosecutors want the judge to focus on the 16 aggravated battery counts because each one carries a mandatory minimum prison term of six years, and sentences for each count may have to be served consecutively instead of at the same time.

Guarded by sheriff’s deputies, the 40-year-old Van Dyke sat at the defense table in a yellow jumpsuit and could be seen talking occasionally with his attorneys.

The proceedings were bound to be emotional. Van Dyke’s wife and young daughters, who pleaded for leniency in letters submitted to the judge, were expected to make statements. Court officials do not know if McDonald’s mother, who has remained silent ever since her son’s Oct. 20, 2014, death, will speak.

The testimony came a day after a different judge acquitted three officers accused of trying to conceal what happened to protect Van Dyke, who was the first Chicago officer found guilty in an on-duty shooting in a half century and probably the first ever in the shooting of an African-American.

Stephenson accepted the argument that jurors in the Van Dyke case rejected: that the video that sparked protests and a federal investigation of the police force was just one perspective of the events that unfolded on the South Side.

The judge said the video showed only one viewpoint of the confrontation between Van Dyke and the teen armed with a small knife. She found no indication the officers tried to hide evidence or made little effort to talk to witnesses.

Prosecutor Ron Safer tried to put a positive spin on the verdict.

“This case was a case where the code of silence was on trial,” he said, referring to the long tradition that officers do not report wrongdoing by their colleagues. “The next officer is going to think twice about filing a false police report. Do they want to go through this?”

The judge in her ruling rejected prosecution arguments that the video demonstrated officers were lying when they described McDonald as moving even after he was shot.

“An officer could have reasonably believed an attack was imminent,” she said. “It was borne out in the video that McDonald continued to move after he fell to the ground” and refused to relinquish a knife.

Both Van Dyke’s trial and that of the three other officers hinged on the video, which howed Van Dyke opening fire within seconds of getting out of his police SUV and continuing to shoot the 17-year-old while he was lying on the street. Police were responding to a report of a male who was breaking into trucks and stealing radios on the city’s South Side.