It’s been a few days now, but people are still reacting to Jill Scott pretending to give oral sex to a microphone at one of her shows.

So far there’s been memes, comments, ongoing chatter and the singer even had to address it all during a recent interview with Joe Budden.

Now the latest person to weigh in is the comedian Michael Blackson, who posted a photo of Scott and Bill Cosby. Blackson also created phony dialogue between the two: 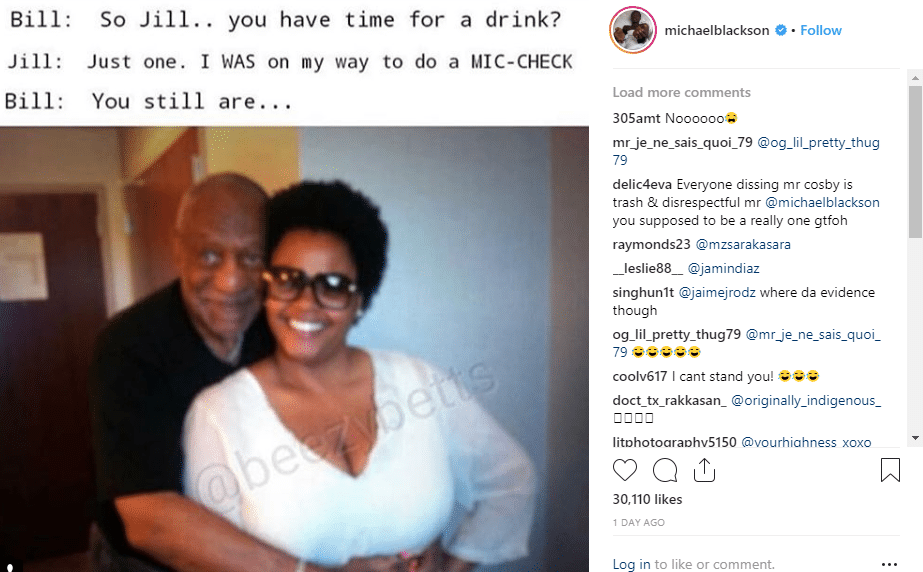 “Bil: So Jill, you have time for a drink?

Jill: Just one. I was on my way to do a mic-check.

Bill: You still are.”

But a lot of people didn’t find the post funny, mainly because Blackson used Scott as the butt of his joke.

“Damn, you that weak you gotta disrespect a goat,” one person wrote. “Funniest sh– you ever done was on ‘Next Friday.’ That was like 50 years ago. Try harder.”

“This is tasteless and unfunny,” a second person commented.

There were also those who didn’t like that Blackson included Cosby in his post since he’s now a convicted rapist. Plus, there was a back-and-forth on whether Black folks should still defend the fallen comedian, which has been an ongoing debate since the first rape accusation surfaced.

“How are people here more upset about his destroyed legacy than the fact that he’s a rapist?” someone asked

“Bill Cosby is a convicted rapist, bruh. “He destroyed his own legacy,” another person wrote.

Scott hasn’t responded to Blackson but based on her interview with Budden, she probably wishes all of the controversy would just go away.