Appearing on “Tucker Carlson Tonight” Tuesday, Parker argued that Blacks are reconsidering their commitment to the Democratic party, adding that Black American voters have never been defined by the party’s liberal views. Her remarks come amid a so-called “BLEXIT,” or Black exit” from the far left led by young conservatives like Candace Owens and rapper Kanye West, who has since distanced himself from the campaign. 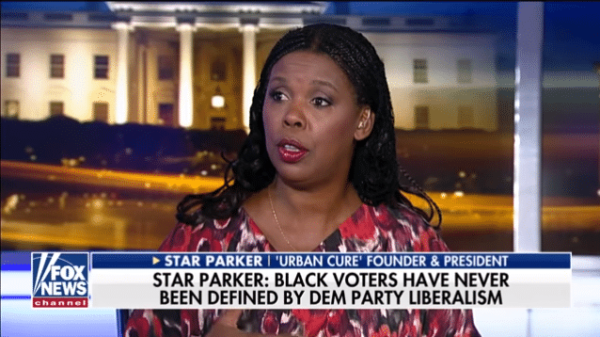 “We have two things happening right now that are very exciting,” Parker told host Tucker Carlson. “Number one. African-American millennials; those that Kanye West are motivating, those that Candace Owens are motivating. And they’re saying, ‘Wait a minute, what have Democrats done for us?’”

“First of all, the millennial doesn’t buy this ‘racism behind every rock’ narrative of the Democrat party,” she added before praising President Donald Trump‘s efforts in urban communities.

Carlson questioned whether the issue of illegal immigration was a turn-off for Black voters, as Democrats place increased importance on “foreign nationals” rather than natural-born U.S. citizens. Parker concurred, and proceeded to accuse the left of “hijacking” the civil rights movement.

At one point, she argued that low-wage workers are now forced to compete for jobs with “people who will not speak English.”

“In California, for instance, you can take the driver’s license test in 40 languages,” she pointed out.

“But, so why — I never hear Maxine Waters or any member of the CBC mention that,” Carlson replied. “Why?”

“Because they are very invested in progressivism. It’s their job to make sure Blacks do not get any of this information,” said Parker. “Their — their — the whole Congressional Black Caucus is similar to the overseer during slavery.”

She added: “They had to make sure that no slave gets any information of freedom, and that’s been their role for the last 50 years.”