Comedian D.L. Hughley didn’t mince words in his sharp rebuke of NBC host Megyn Kelly after she suggested there was nothing wrong with dressing in Blackface for Halloween, so long as it’s all in good fun.

Kelly’s remarks drew immediate backlash Tuesday following a panel discussion on her daytime talk show where she and her guests talked about racial sensitivity in wearing Halloween costumes. The former Fox News anchor acknowledged that a white person dressing in Blackface and vice versa is troublesome but failed to see what is offensive about it.

“Back when I was a kid, that was okay just as long as you were dressing as a character,” she argued. “What is racist?”

Kelly, 47, tried to further defend her point by arguing that Halloween was supposed to be “jarring,” noting that “you have guys running around with fake axes coming out of their head!”

Hughley, who’s gone toe-to-toe with the conservative journalist before, blasted Kelly for her willful ignorance on the subject in a series of tweets Tuesday and Wednesday, writing, “#MegynKelly seems to forget she’s not on #FOX anymore!”

He added, “#MegynKelly asks what’s so wrong with dressing in #BlackFace! It’s cool! Until a Dallas cop shoots you in your own Apartment! #TeamDl.”

Hughley proceeded to school Kelly on why blackface is so problematic, writing sarcastically, “It’s ONLY the mockery of black ppl as slaves & subhuman happy-go-lucky darkies like Jim Crow & Uncle Tom. Of Course last time I saw her, #MarkFurhman was normalizing police brutality b4 she brought me on. #DidntEndWell #TeamDl”

The actor was alluding to a heated 2016 interview with Kelly and disgraced LAPD officer Mark Fuhrman that quickly devolved into chaos. Hughley had appeared on the Fox News show to discuss his new book and the fatal shooting of a Black man, Philando Castile.

In the video, Kelly refused to give the presumption of innocence to Castile, 32, who was gunned down by a Minnesota officer during a traffic stop. She argued that the public “did not have all the facts” to make an assumption and suggested Castile may have threatened the officer.

” … That mindset that Megyn Kelly expressed is why these things keep happening,” Hughley told CNN host Michael Smerconish earlier this year. “It is that benign racism where you can go, no matter what we see, we are going to ascribe it to … We’ll blame 12-year-old boys in Cleveland for having toy guns and being shot down. It’s that mindset that allows these things to happen.”

Kelly has since apologized for her blackface comments, telling viewers Wednesday “I was wrong and I’m sorry.” It wasn’t received well by Hughley, however.

“If only #Halloween was on #ElectionDay so white people would wear #BlackFace to the pols and get their votes suppressed! #TeamD” he wrote, later adding, “…The minute you dress in #BlackFace your cholesterol should go up, and your credit score, and earning potential should go down!” 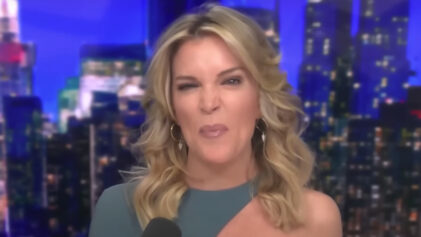