JERUSALEM (AP) — The Israeli government announced Monday that it agreed to absorb 1,000 Ethiopian Jews — accepting just a fraction of the African country’s 8,000 remaining Jews who want to move to Israel.

Prime Minister Benjamin Netanyahu said that a special committee had agreed to allow community members who already have children in Israel to immigrate. It was not clear what will happen to the remaining 7,000 people. 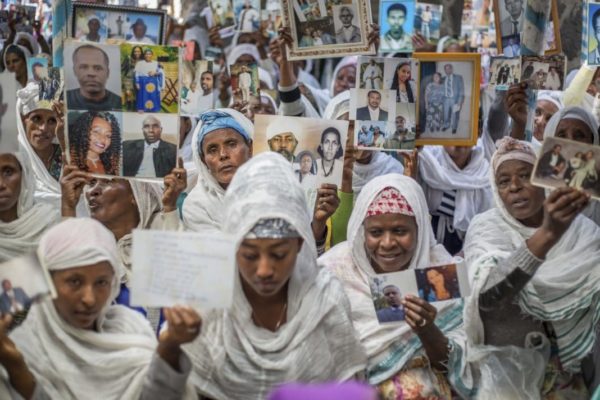 Members of Ethiopia’s Jewish community hold pictures of their relatives in Israel, during a solidarity event at the synagogue in Addis Ababa, Ethiopia Wednesday, Feb. 28, 2018. Hundreds of Ethiopian Jews gathered at the synagogue to express concern that Israel’s proposed budget removes the funding to help them immigrate to reunite with relatives in that country, as representatives said they will stage a mass hunger strike if Israel eliminates the funding. (AP Photo/Mulugeta Ayene)

Alisa Bodner, a spokeswoman for Struggle for Ethiopian Aliyah, a group petitioning the government to allow Ethiopian Jews to immigrate, called Netanyahu’s decision an “incredible disappointment” and “another spit in the face” for Israel’s Ethiopian community. Citing his previous vows, the group is calling on the prime minister to provide a path to citizenship for the remaining 7,000 members of the Jewish Ethiopian community.

Many of the 8,000 are practicing Jews and have relatives in Israel. But Israel doesn’t consider them Jewish under strict religious law, meaning their immigration requires special approval. The 8,000 are descendants of Ethiopian Jews who were forcibly converted to Christianity around a century ago, and the Israeli government views bringing them to Israel as family reunification rather than “aliya,” or Jewish immigration.

Israel agreed in 2015 to bring the remaining Ethiopians to Israel, but has not authorized funding for their move. The families allege discrimination.

Avraham Neguise, an Ethiopian-Israeli lawmaker and member of the special committee, said that while he welcomes the government’s decision, he was disappointed that this issue has yet to be resolved.

“We won’t cease in our mission, our struggle until everyone is reunited with their family here in Israel,” he said.

Neguise said the committee did not discuss plans for the remaining 7,000 Ethiopian Jews in Monday’s meeting.

Israel is home to approximately 144,000 Jews of Ethiopian descent, the majority of whom immigrated to Israel in the 1980s and 1990s. Last year Israel approved immigration for 1,300 Ethiopians with relatives who had already immigrated.

But their assimilation into Israeli society hasn’t been smooth, with many arriving without a formal education and then falling into unemployment and poverty. Ethiopian Jews have also protested in recent years against perceived discrimination in Israeli society.