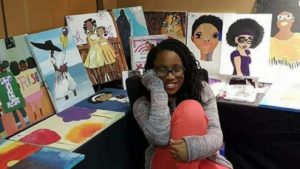 Camryn Green, 13, has been painting since she was 4 years old. So far, she’s sold nearly 500 paintings online. (Phot by Erica Perry-Green)

At just 13 years old, North Carolina girl Camryn Green has already made significant strides in turning her dreams of becoming an artist into reality — and she has no plans of letting up.

The budding entrepreneur has sold over 500 paintings, is the author of a children’s book and uses the proceeds from her artwork sales to sponsor a student in Liberia, The News & Observer reported. Green was also chosen to speak at the 38th annual MLK, Jr. Interfaith Prayer Breakfast in Raleigh last month.

The teen’s many accomplishments recently got her featured as the newspaper’s “Tar Heel of the Week,” where she spoke about how she juggles all her responsibilities and offered words of advice to young business owners like herself.

“I always wanted to be an artist,” she told The News & Observer of how she got her start. “I’ve been painting since I was 4, although I have never taken any art classes. One day I just stopped the color-by-number painting, got out a canvas and painted freehand, and it actually looked pretty good.”

“My mom and I made a Facebook page, and orders started coming in,” Green added. “So we started Camryn’s Creations.”

The eighth-grader said her artwork ranges from $20 to $100, for her larger paintings, and that she has managed to sell about 500 pieces so far. She told the newspaper some of the money goes into a college fund and some goes back into the business. The rest, she said, goes to orphaned children in Liberia who can’t afford to go to school.

Green said she was inspired to support the cause after a friend’s mom, who’s from Liberia, told her how bad it was for the kids there. She added that her own mother’s willingness to give back and help others achieve their dreams has encouraged her to do the same.

“Since I was little, I have always wanted to help them, so when I started my business I immediately wanted to do something,” she explained. “I’ve been able to sponsor a yearly scholarship for a young lady named Princess for two years, and we are doing it this year too.

When it comes to her art, the young teen said she loves painting African art, African- Americans and just people in general. She also draws inspiration from herself, saying, “I have an Afro, so I love painting Afros.”

Green said that the best thing she’s learned thus far is how to work hard to maintain her business. Even when she doesn’t feel like painting, she does it anyway, keeping in mind all the good she’s able to do with the money she earns.

For other kids looking to become an entrepreneur like her, Green offered this bit of advice: “Set a goal for yourself first. I set a goal to make at least 10 paintings. I was 8 and I didn’t know much about it. Work hard, be consistent with it, and don’t give up on your dreams.”