A former University of Michigan professor and hospital executive is suing the institution after she says she was fired for conducting an investigative study into claims that Black patients were treated unfairly by U-M Health System staff.

According to MLive, Dr. Carmen Green, who was appointed to the newly created position of Associate Vice President and Associate Dean for Health Equity and Inclusion in 2013, said she became troubled when a U-M Health System chaplain reported that hospital staff were seemingly calling security on Black patients and their visitors for no reason.

She presented her initial findings to UMHS officials in December of last year, MLive reports.

The professor’s civil suit argues that U-M administrators fired her from her position a month later in an act of retaliation for the damning report. Green is seeking over $500,000 for the loss of her job and compensation for emotional distress and attorney fees, according to her lawyer Jim Fett.

Even in the face of the ex-professor’s pricey lawsuit, U-M officials assert that the less-than-favorable study had nothing to do with Green’s termination. Instead, their response to the civil suit cited findings from a “climate assessment survey” conducted within the Office for Health Equity and Inclusion in November 2014 — a month before Green presented her findings.

“Dr. Green was removed from her administrative appointment as head of the Office of Health Equity and Inclusion effective Jan. 6, 2015, because she repeatedly violated the U-M Health System Code of Conduct and the university’s Professional Standards for Faculty in her interactions with team members whom she supervised,” U-M spokesman Rick Fitzgerald told The Ann Arbor News.

Per MLive, the assessment survey also went on to accuse Green of bullying and yelling at her co-workers, suggesting that she had “leadership deficiencies.”

The university said it has yet to confirm the preliminary findings of the former professor’s discrimination report. However, officials assured that information gathered by the Office of Health Equity and Inclusion would help university educators to address implicit bias, teach de-escalation skills and promote partnerships with the hospital’s social work and spiritual care departments, MLive reports.

Despite the university’s efforts to rectify the discrimination situation, Green’s lawyer accused UMHS CEO T. Anthony Denton and James Woolliscroft, U-M Medical School Dean, of planning the steps for Green’s termination soon after she presented the findings of the report.

“The lying that went on here related to the smoking gun of retaliation,” Fett said. “That is the short gap between her protected activity of giving them the security report, which was the launching point for addressing this — the short gap being two days — until they decided to fire her.

“That is legally a smoking gun,” he added. “It doesn’t take a lawyer to figure out if they decided to fire her that quick, that it was the security report that they didn’t like and what she proposed to do about it.”

Even Green said in her deposition that she had never heard of anyone, “particularly at my level, being dismissed so quickly.”

MLive reports that the lawsuit is expected to go to trial on Dec. 5, 2016.

Green is still employed as a professor of anesthesiology, obstetrics and gynecology and health management and policy in U-M’s Schools of Medicine and Public Health. 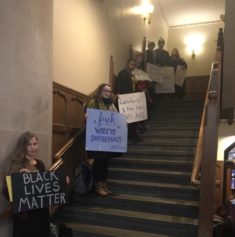