Racial tensions have reached a boiling point at a Washington, D.C.-based university, as school officials scramble to address a string of racially-charged incidents targeting Black students.

According to the Washington Post, a crowd of American University students gathered at the Northwest Washington campus Monday to protest and demand the suspensions of two white students accused of hurling a banana at a Black female student.

The same night of the banana assault, which occurred on Sept. 8, another Black student discovered a rotten banana outside her dorm room, along with an obscene drawing of a penis on the white board attached to her door.

“I wouldn’t let people drive me out, but it’s kind of sad that this kind of thing still happens,” Neah Gray, the freshman who found the banana by her dorm room door, told the Washington Post.

Members of the university’s Black Student Alliance said racial incidents like these have been happening for some time, but university officials have failed to adequately address them. For instance, the Huffington Post reports that racist epithets were scrawled on the dorm doors of African-American students last year.

At the protest Monday, Black student leaders entreated campus officials to put forth more effort in protecting its Black students, the Washington Post reports. One student in the crowd could be seen holding a sign that read “Racism at AU is bananas.”

AU sophomore and protest organizer Ma’at Sargeant also urged the university to hire more faculty of color in the school’s department of student life, as well as alert students when racially-charged incidents, like the banana assault, occur on campus.

“Nothing is ever done, no consequences, just town halls where we speak to deaf ears,” Sargeant said.

“Black women are under threat on campus — they’re being used as target practice,” Bell said. “We’re literally being attacked and assaulted on campus, and there’s nothing being done about it by the administration.

The university has since released a statement on the banana-related incidents, but noted that the dorm room episode wasn’t reported as a racially-charged act.

“Regarding the known facts, on September 8, an incident that was not characterized as bias related occurred in a residence hall and was reported to Residence Life staff,” the statement read. “Based on the accounts provided, the DOS filed conduct charges, which are currently being adjudicated through the Student Conduct process.”

According to the Washington Post, AU President Cornelius M. “Neil” Kerwin also released a statement ahead of the protest Monday, calling the banana incidents “unacceptable student behavior . . . that left our African-American students and others shaken, upset, and even feeling unsafe.”

“Such acts are reprehensible and are the antithesis of the values and standards we embrace as a university,” Kerwin continued. “I share with many of you deep disappointment and frustration that these events have disrupted our community and challenged our efforts to build an inclusive campus culture. They simply have no place here. We will confront racist expressions with forceful condemnation and respond to discrimination with every tool at our disposal.”

The university president confirmed that the incident concerning the thrown banana had been thoroughly investigated and that the perpetrator(s) were punished.

Similar incidents of racial intimidation have taken place on colleges campuses across the nation, sparking protests and forcing universities to re-structure the make-up of their institutions to ensure an all-embracing learning environment.

“Do not be discouraged,” Kerwin said. “We will not be dissuaded from our goal to create a more inclusive climate.” 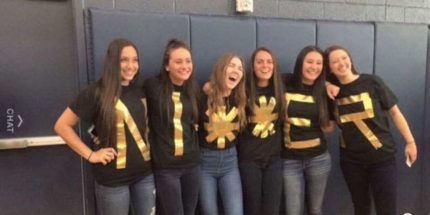