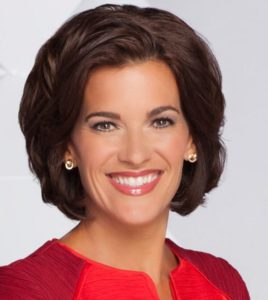 A veteran anchorwoman at Pittsburgh-based WTAE-TV is suing the news station after she was fired for making racially insensitive comments about Black people on Facebook.

Emmy Award-winning anchor Wendy Bell filed a lawsuit against her employers Monday, accusing them of terminating her because she’s white. The ousted newscaster is seeking back pay, punitive damages and her former job, the Associated Press reports.

Station executives fired Bell on March 30 after she published racially charged messages on the WTAE Facebook page. According to the New York Daily News, the offensive comments were in reference to a tragic ambush in Wilkinsburg, during which six people, including an unborn baby, were killed at a backyard barbecue.

“You needn’t be a criminal profiler to draw a mental sketch of the killers who broke so many hearts two weeks ago Wednesday. … They are young black men, likely in their teens or in their early 20s,” Bell wrote on March 21.

“They have multiple siblings from multiple fathers and their mothers work multiple jobs. These boys have been in the system before,” she continued.

Bell’s comments drew major backlash from the public, many accusing her of racially stereotyping African-Americans as criminals. WTAE parted ways with the 18-year veteran anchor after it deemed her remarks racially insensitive and in violation of the station’s journalistic code.

“WTAE has ended its relationship with anchor Wendy Bell,” Hearst Television, the station’s parent company, said in a statement. “Wendy’s recent comments on a WTAE Facebook page were inconsistent with the company’s ethics and journalistic standards.”

According to the New York Daily News, Bell has since apologized and admitted that her comments “could be viewed as racist.” But her legal team asserts that the popular news anchor was ultimately let go “because of her race.”

“Had Ms. Bell written the same comments about white criminal suspects or had her race not have been white, Defendant would not have fired her, much less disciplined her,”  the federal court documents read.

The lawsuit goes on to say that Bell’s remarks were “clearly and obviously not intended to be racially offensive.”

“It makes me sick. What matters is what’s going on in America, and it is the death of black people in this country,” Bell told AP back in March. “… I live next to three war-torn communities in the city of Pittsburgh, that I love dearly. My stories, they struck a nerve. They touched people, but it’s not enough. More needs to be done. The problem needs to be addressed.”

Bell’s attorney, Sam Cordes, told the Pittsburgh Post-Gazette Tuesday that he and his client also plan to add a claim of gender discrimination to the lawsuit.

Those upset over the news caster’s firing are pointing the finger at the Black Media Federation, who had reportedly met with board members and WTAE officials to discuss the Bell situation and other issues concerning diversity. However, according to the Pittsburgh Post-Gazette, the announcement of Bell’s firing came before the meeting ever occurred.

“…The federation stressed that it had not called for Ms. Bell’s termination,” the publication reports.

As for the Wilkinsburg ambush, two men, Cheron Shelton and Robert Thomas, have been identified as suspects in the deadly shooting. According to the New York Daily News, both are currently being held on other drug-related charges. Neither one has been criminally charged for the killings.