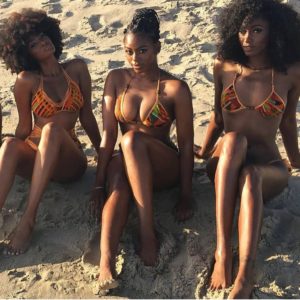 Photos featuring a set of Black models have gone viral after being shared on Twitter April 23 and 24. Model Cole Woods shared two pictures of her posing on the beach with other Black models.

In one image, two women laugh in the sand, their curly afros framing their faces. Another image depicts three women gazing into the camera as their toes are covered in sand.

A tweet from Woods reveals model Tori Brixx of MTV’s Wild ‘n Out posted the photo on her Instagram page.

Woods initially shared the beach photo of model Joia Talbot and a model who goes by AJ. Since then, the image has gained nearly 560 likes and 422 retweets from men and women who appreciate their dark complexion.

Another photo featuring the three models was tweeted the next day, and it attracted more attention than the first one. The picture has more than 1,000 retweets and almost 1,600 likes from admirers.

How all of y’all fine as hell tho??

The image has drawn such a big reaction that it was featured on New York-based Melanin Monday’s Twitter profile. The page is dedicated to showcasing “the beauty and diversity of melaninated people all over the world.”

Yesterday, model AJ shared yet another photo from the shoot on her Instagram account. It has more than 1,400 likes so far.

Many devotees aren’t just in awe of the Black beauties, but they are also interested in finding out where to purchase the African-inspired printed swimsuits. A look on Red Star Collective’s Etsy page reveals the bikinis can be found on the website. The rope detail KenteKini pictured on Talbot goes for $159.

The brand also shared other images from the photo shoot on their Instagram page.

Woods’ Twitter page shows she is a former professional basketball player. The 6’2 model now works internationally. AJ is also an actress based in Los Angeles. So is Talbot, who specializes in commercial and print, according to their respective Instagram pages.