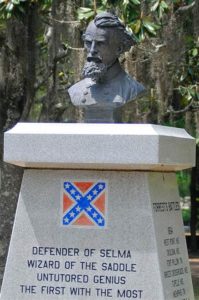 Over a century and a half since the end of the Civil War, the spirit of the Confederacy lives on in the hearts and minds of conservative white Southerners.  Nine months have passed since the Charleston, South Carolina, massacre at Emanuel AME Church — the violent act of racial hatred that led to a national debate on the Confederate flag; caused the state of South Carolina and others to remove the Confederate flag from government buildings; and moved retailers such as Walmart to stop selling the rebel flag.

However, as The New York Times reported, efforts to remove Confederate symbols have slowed down and even stopped, amid a resurgence in efforts to restore Confederate monuments and other symbols of white supremacy and domestic terrorism.   At least a dozen states have considered measures for recognizing the Confederacy, with some states memorializing Confederate history.  The governor of Alabama immediately took down the flag following the Charleston mass shooting that killed nine Black people, while Tennessee proposed measures to protect Confederate memorials and monuments.

Mississippi lawmakers rejected a dozen bills that would have changed their state flag, which contains the Confederate emblem.  In the Magnolia state, where last month that state’s governor proclaimed April as Confederate Heritage Month, a Black civil rights lawyer  received death threats after suing in federal court to have the state flag removed from the capital in Jackson.

And in Tennessee, a debate over Confederate symbols led to a fight between a Black lawmaker, Rep. G.A. Hardaway, and a white legislator, Rep. Curry Todd, R-Germantown, on the floor of the state House, according to Nashville Scene.

According to the Southern Poverty Law Center, there are a minimum of 1,170 publicly funded Confederate symbols across the U.S.  As SPLC noted, the New Orleans City Council voted to remove four monuments honoring the Confederacy and Confederate heroes, leading to a federal court challenge by the Sons of Confederate Veterans and preservation groups.  SPLC filed an amicus brief in the case, pointing out the role of the monuments in a shameful history, and characterizing the Civil War as “a violent, treasonous campaign of terror to preserve slavery and white supremacy.”  The organization also noted that after the Civil War, “white terror and domination” continued.

Last year, in response to the Charleston massacre, SPLC started the “Erasing Hate” campaign to eliminate state-sanctioned symbols in honoring the Confederacy. Shockingly, in addition to the flag, Confederate buildings, statues, paid holidays and even a park in honor of Confederate general and Ku Klux Klan founder Nathan Bedford Forest remain.  White pro-Confederate sympathizers couch the hateful symbolism in terms of Southern heritage, making it appear to be a source of pride.

“The Confederate flag doesn’t just represent Southern ‘heritage,’ it’s a deeply divisive symbol used by racist groups, one what was raised above state capitols in the Deep South during the civil rights movement to show that they stood for white supremacy,” said SPLC Founder Morris Dees. “There’s no place for this or other symbols of the Confederacy in our public spaces.”

As Confederate Vice President Alexander Stephens once said, the Confederacy was “founded upon … the great truth that the negro is not equal to the white man; that slavery, subordination to the superior race, is his natural and normal condition.”

This is the legacy, and the mindset, that some people are striving to protect.