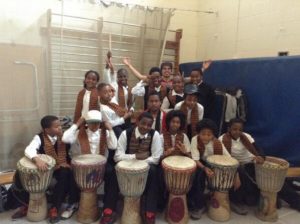 The value of Afrocentric education is being highlighted in Chicago, where an African-centered school is struggling, leading that city’s public school system to recommend its closure.  This comes at a time when schools in the Black community are woefully underfunded and so many educational institutions fail to provide Black children with a road map for success.  These institutions must be cultivated and sustained throughout the country, as they give Black children the cultural grounding, self-esteem and sense of identity necessary to help them understand their place in the world — and thrive in it.

As The New York Times recently reported, the Barbara A. Sizemore Academy, an Afrocentric K-8 charter school, is experiencing challenges these days.  Supporters of closure point to test scores — the school’s third through eighth grades scored in the 14th percentile in reading and the eighth percentile in math.

However, those who appreciate the mission of Sizemore point to its accomplishment of “instilling confidence in a psychologically battered population” facing daily struggles of poverty and crime.  They would argue that success is measured by more than simply test scores — in a society that has learned to teach for the test and yet students are not learning, and where what Black students learn can ultimately benefit white supremacy at the expense of Black self-empowerment.

“When you talk about children who are suffering from all the ills of, you know, the residual effects of slavery,” Danielle Robinson, principal of Sizemore said to The New York Times, “absolutely this is where they need to be.”

The school is reflective of what takes place in other Afrocentric schools, with the achievements of Black people a central part of the curriculum, students addressing teachers by titles, and the use of suspension only as a last resort. Further, students are greeted with the sounds of African drums, and raise their fists to the red, black and green Pan-African flag.

“We are African people,” they say in harmony, emphasizing that they “stress the development of our bodies, minds, souls and consciousness” and are committed to “sustainable living, self-determination and self-respect.”

However, such schools have faced dire straits due to the objections to Black Power by white elites, the issue of standardized test scores, and competition from large, well-to-do charter school networks.

Sizemore is part of a network of three Afrocentric charter schools dating back to the 1970s, stemming from the efforts of Carol D. Lee, professor of education and social policy at Northwestern University, and her husband, Haki R. Madhubuti.  The other schools are the Betty Shabazz Academy, also K-8, and DuSable Leadership Academy, a high school.

The benefits of an African-centered education are clear, as it develops African-centered consciousness and self-identity, produces Black leaders and institution builders, and empowers children with pride as a safeguard against racism.

“Public schools have failed African-American students, which is shown in lower graduation rates and lower achievement,” said Lee in a Florida Times-Union report. “African-centric schools have sprung from the belief that African-American students living in a society with a history of racism and stereotypes need a form of socialization that provides them with sociological buffers,” she added, noting that graduates of such schools have gone on to prestigious universities.

“They all work very effectively in their professional lives because they assume the world is open to them. Our point simply is we can view the world through the perspective of the people of Africa. Africa is the mother of civilization,” Lee said.

As Temple University professor Molefi Kete Asante wrote in 1991 in Educational Leadership, many Black children lack direction and confidence because they are not culturally empowered or centered in the classroom.

As Dorothy Gilliam reported in the Washington Post back in 1990, Afrocentric education is “an attempt to correct and balance history,” to which its opponents respond with alarm, characterizing it as false history promulgated by “angry” and “militant” Black scholars.

“An African-centered teacher,” said poet, performer and former Washington, D.C., public school teacher Abena Walker, “is one who has internalized the value system that is based on cooperative learning, seeing discipline as lovingly helping children develop self-control, who can think and plan holistically, combining subjects through projects and integrating the arts into those projects.”

According to Walker, African-centered education is part of a movement that has influenced educational methodologies across the nation, through such names as ” ‘cooperative education, teaching and learning;’ ‘holistic education;’ ‘interdisciplinary education;’ and ‘values education’ or ‘character- building.’ ”

“White children tell me how troubled they are in the present system of reward and punishment and fragmented classes. All can benefit from the African-centered methodology, which stresses such benefits as logical consequences versus punishment,” Walker added.

In a society in which negative images of Black people thrive, Black children need a form of education that centers on the accomplishments of their own people and exists to elevate them.  They are at risk and must be supported if they are going to survive, and if the Black community is to thrive.  And this means that, nationwide,  schools such as Sizemore must receive the financial backing they need  to fulfill their important mission.