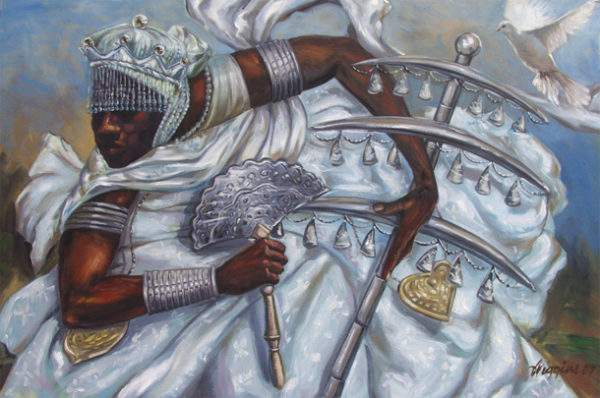 The Yoruba of Nigeria

In the beginning, all that existed were the water, land and sky, which was ruled by Olorun. Another god named Obatala went to Olorun to ask if he could create land for living things to exist. When he was granted permission, Olorun visited Orunmila, Olorun’s first son, to consult with him about his wish. In response, Orunmila told him that he must obtain a gold chain, a snail’s shell filled with sand, palm nuts, corn and a special egg that encompassed the essence of both the men and women orishas. Obatala hung the long gold chain from the sky and climbed down to earth, only to find that he could only go so far due to the chain’s length. When he reached back to pour the sand from the snail’s shell to form dry land, he dropped the special egg and released Sankofa. When he reached the earth, Obatala spread the sand and planted the pine nuts. He even founded a hill and called it Ife. After a while, he decided to fashion human beings to keep him company because his task was quite lonely. He founded the city of Ife, and the gods and goddesses visited him and his creations on earth frequently.

The Boshongo   of the Congo River

The Boshongo tell the story of a creator named Bumba. He made the skies, the sun and the moon. He also created the African Cosmogony before he created human beings. The beings of the African Cosmogony all created one another. In addition, the beings of the African Cosmogony are not deemed more important than the human being that came after them. Bumba’s three sons followed in his footsteps to complete the creation process. This story further embraces and supports the Bushongo’s importance of communalism nature. This creation myth communicates the necessity of unity for the sake of the community as well as the earth.