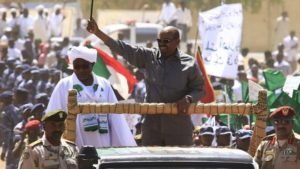 Sudan made headlines this week when it became the first African state to cut diplomatic ties with Iran following the attack on Saudi Arabia’s embassy in Tehran, as tension escalated over the Saudi execution of Shia cleric Nimr al-Nimr for terror-related offences.

It was joined by Djibouti and Somalia, while Egypt condemned the attacks without going as far as severing diplomatic ties.

What stands out in Sudan’s case is how quickly its relations with mainly Shia Iran have deteriorated.

The two nations were strong military allies in the 1990s and 2000s, with Iran providing arms and training to the African nation.

But relations deteriorated when in 2014 Sudan, the only African state governed by a Sunni version of Islamic law, expelled an Iranian diplomat for promoting Shia Islam in the country.

In the rivalry between Sunni Saudi Arabia and Iran for supremacy in the Islamic world, Sudan is now firmly in the Saudi camp. Its troops are part of the Saudi-led campaign fighting Shia groups in Yemen.

However, to cut diplomatic ties is still unusual. It seems that Sudan — which is not at all a heavyweight in international politics — wants to show how far it is willing to go to demonstrate loyalty to the Gulf kingdom.

Sudan’s economy has suffered since the oil-rich south seceded in 2011, and it is hoping that Saudi petro-dollars will help it rebuild its economy.

Somalia is also in dire need of investment following more than two decades of conflict, including the current insurgency by the al-Qaeda-linked al-Shabab group.

Its authorities recently arrested two Iranian men in what was seen as a warning to Iran not to try to propagate Shia Islam in a country where the overwhelming majority of people are Sunni Muslims.