The Allen family chose to hold their annual reunion on Rollins Lake in Nevada County. Photos provided by the family

A Black family says they were victims of a hate crime, and terrorized by a racist white man at a California campground this past weekend.

“We thought Rollins Lake would be a perfect place,” said the 27 year-old Sacramento resident.

But apparently that weekend, it was not. On the first night, the family enjoyed themselves as the children danced to music at the campground. Family members heard and ignored racially offensive comments from a rowdy group in the adjacent campground.  The next night, however, one man began to yell at Allen’s family with more hateful racist language.

“I didn’t come here to sleep next to any F-ing Ns, [is what he said],” Allen recalled in an interview with Fox 40 in Sacramento.

The family complained to the managers of the campground, and the situation went downhill from there.

“Whatever was said infuriated the main aggressor of the group, and all you hear is him saying the ‘n’ word, ‘I’m going to kill you F-ing Ns,'” Allen said.

At that point the man ran towards their campsite with what Allen thought was a shotgun.

“They didn’t think that he was drunk, and didn’t find any weapons on him and for some reason or another decided to let him go… We expressed that we had feared for our lives, you know? And still nothing was done at that point,” Allen said. 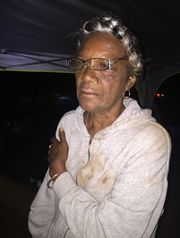 Melvina Allen was injured when she tripped and fell while trying to escape threatened violence. (Photo: Kanisha Allen)

Allen said her 66-year-old mother tripped and fell while trying to escape.

“We’ve got kids screaming ‘are we going to die? Why don’t they like us?'” Allen said.

Allen also said the alleged instigator attempted to leave the grounds when sirens blared, but management blocked the exit.  Greenhorn Campground manager Mike Liserra told ABC-10 he had never seen anything like this incident.

“We told them we would stay up all night with them if that’s what it takes to make them comfortable,” Liserra said.

Nevada County Sheriff’s Captain Jeff Pettitt said he would recommend that the district attorney file a charge of making a criminal threat, which could constitute a misdemeanor or a felony.  A hate crime charge could follow an additional investigation.  The man and the rest of his group have been banned from the camping area.

Allen, who had never experienced such blatant racism, was left shaken.

“Maybe we were a little bit naive to think we could go into an area that is not necessarily known for diversity and think that nothing would happen,” she said.

“Let’s bring these people back. They’re kind of nervous to come back to our community and I get that,” said Shera Johnson, an organizer and Grass Valley resident. “But in 2016 when they bring their family back, they’re going to have a totally different experience.”  The family has started a GoFundMe page to raise funds for their next reunion trip.

Meanwhile, according to the Southern Poverty Law Center, California has the highest number of active hate groups in the U.S., with 57.

Black people have always lived under the constant threat of terrorism, and as this latest incident at a California campground shows, the threat exists even when we are on vacation or at a family reunion.