Black enlisted men were used as human guinea pigs in chemical experiments during World War II—not by Nazi Germany, but by Uncle Sam.

As was reported by NPR, 60,000 American soldiers were enrolled in a secret chemical weapons testing program in which they were exposed to mustard gas and the chemical agent lewisite, which causes lung irritation and blisters. Moreover, the U.S. Department of Defense conducted the tests based on the race of the soldiers. Black, Japanese-American and Puerto Rican soldiers were locked in a gas chamber and exposed to the chemicals. White soldiers were used as the control group.

“They said we were being tested to see what effect these gases would have on Black skins,” said Rollins Edwards, 93, of Summerville, S.C. “You had no choice. You did not know where you were going. They didn’t tell you anything.”

Edwards says his skin still falls off in flakes as a result of the testing. For years, the World War II veteran carried around a jar full of flakes to convince people that something had happened to him.

Although the Pentagon had admitted as early as 1991 that the Army tested mustard gas on enlisted soldiers during World War II—and the experiment program was officially declassified in 1993—news about the racial targeting of soldiers was kept under wraps until recently. Rollins Edwards, who lives in Summerville, S.C., shows one of his many scars from exposure to mustard gas in World War II military experiments. More than 70 years after the exposure, his skin still falls off in flakes. For years, he carried around a jar full of the flakes to try to convince people of what happened to him. Source: AMELIA PHILLIPS HALE FOR NPR

This revelation that the Army tested chemical weapons on soldiers of color is both troubling and an outrage, but the concept of Black people being used in medical and other experiments is by no means a new phenomenon. There are numerous examples of Black people being used as guinea pigs in unethical medical experiments. Perhaps the most well-known example is the Tuskegee experiment, in which the Tuskegee Institute and the U.S. Public Health Service studied the natural progression of syphilis in 600 Black men, who were never notified of their condition and were not treated. The tests, which began in 1932, did not end until news reports exposed the inhumane and racist practice in 1972.

But there are other cases beyond Tuskegee. For example, in the early 1800s, Sara Baartman, or “Hottentot Venus,” one of two KhoiKhoi women made into freak show attractions in Europe, was subjected to medical experiments. And modern gynecology was the result of torturous gynecological experiments that J. Marion Sims performed on enslaved women without anesthesia.

At the turn of the century, the U.S. Public Health Service conducted experiments on Black prisoners suffering from pellagra, which is a B-13 or niacin deficiency leading to sensitivity to sunlight skin lesions, dementia and death. In 1945, 53-year-old truck driver, Ebb Cabe, was injected with plutonium by the U.S. Atomic Agency after he was taken to the hospital and kept there for six months following a car accident. Cabe received 40 times the amount of plutonium—the key ingredient for a nuclear bomb—a typical person is exposed to over the course of a lifetime. He died eight years later of heart failure.

During the 1950s, the CIA and the U.S. military released half a million mosquitoes with yellow and dengue fever into Black Florida communities, leading to multiple illnesses and deaths. The government wanted to assess the use of mosquitoes as military weapons. Also in that decade, Henrietta Lacks became the first test subject on cloning, without her knowledge or permission, with 20 tons of her cells grown since her death. Rollins Edwards as a young soldier in 1945 at Clark Air Base in the Philippines. Source: AMELIA PHILLIPS HALE FOR NPR

In the 1990s, children in Los Angeles were injected with an experimental measles vaccine unapproved by the FDA, and one which had developed a bad reputation for increasing high death rates in Haiti, Guinea Bissau and Senegal.

Between 2006 and 2010, 148 female prisoners in two California prisons—the majority Black and Latino— were sterilized without their consent. Meanwhile, Israel subjected African immigrant women to mandatory contraceptive injections of Depo-Provera, leading to a 20 percent birth rate decline for Ethiopian Israelis.

In 2000, federally funded researchers placed sludge from a sewage treatment plant on lawns and vacant lots in Baltimore and East St. Louis. The communities were told the toxic waste was safe. And in 2012, at least 500 children in Chad were given MenAfriVac—whose side effects include convulsions and paralysis— without notification or parental consent.

In addition, the CDC hid evidence that Black babies had more than triple the chance of developing autism if they were given an experimental measles vaccine before the age of three.

For years, the Black community has warned of conspiracies against their communities, and were told they were neurotic and imagining things. But as the latest news from the Pentagon shows us, these conspiracies are not theories but reality. 73 Years Later, Remains of Lost Tuskegee Airman May Have Been Discovered In Europe 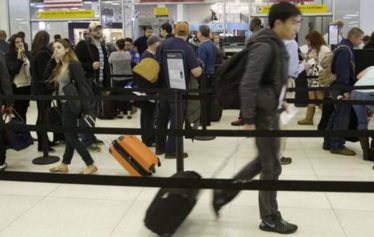 Does the DEA Engage in Racial Profiling? No One Knows Because It Doesn’t Report The Race of People Agents Stop for Questioning