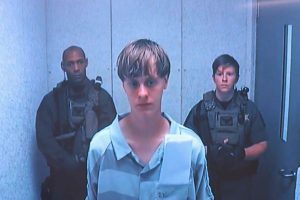 More details are coming out about the terrorist attack that left nine South Carolina churchgoers dead. The attack was carried out by Dylann Roof, a white supremacist who wanted to spark a race war, according to police reports. Roof has been charged with nine counts of murder and an additional weapons charge, according to local prosecutors.

On Wednesday night, Roof walked into the historic Emanuel African Methodist Episcopal Church, where he was welcomed into a Bible study group. He requested to sit next to the church’s pastor, the Rev. Clementa Pinckney, and later open fired on the parishioners.

According to NBC News, Roof told police he almost backed out “because everyone was so nice to him.” But he decided to go through with the attack because he wanted to spark a racial conflict and stop Black people from “taking over the country.”

Roof appeared via video conference in court Friday. He was flanked by two police officers and wore a striped prison jumpsuit. His bond for a weapons charge was set at $1 million. Local police have confirmed Roof is being held in a cell next to Michael Slager, a former police officer who shot African-American Walter L. Scott in the back while he was running away from a traffic stop.

Magistrate Larry Gosnell, who oversaw the hearing, surprised people when he said he also felt sorry for the gunman’s family.

According to The Post and Courier, Gosnell said, “There are victims on this young man’s side of the family. No one would have ever thrown them into the whirlwind of events that they have been thrown into.”

Several family members of the victims were present and allowed to make statements.

“I forgive you,” said Nadine Collier, daughter of victim Ethel Lance. “I will never talk to her ever again, never be able to hold her again. I forgive you and have mercy on your soul. You hurt me, you hurt a lot of people, but I forgive you.

Many of the comments had a religious tone and urged Roof to repent and turn his life over to Christ.

“Hate won’t win,” said Alana Simmons, granddaughter of victim Daniel Simmons. “My grandfather and the other victims died at the hands of hate. Everyone’s plea for your soul is proof that they lived in love and their legacies live in love.”

Even though the shooting had clear racial motives, the incident has become politicized with several politicians and media figures saying the attack had nothing to do with race. Although local authorities have called the attack a hate crime, personalities on Fox News have downplayed that the attack had a racial motive.

Speaking on Fox and Friends, the Rev. E.W. Jackson, an African-American, said the attack was based on the gunman’s hatred of religion, not Black people.

“I have to tell you that I am deeply concerned this gunman chose to go into a church because there does seem to be a rising hostility against Christians across this country because of our biblical views,” Jackson said. “And, I just think it’s something we have to be aware of and not create an atmosphere where people take out their violent intentions against Christians.”

However, political comedian and Daily Show host Jon Stewart dropped all humor from his show last night and addressed the shooting in sober comments. He pointed out that South Carolina has still not addressed its legacy of racism. It still flies the Confederate flag and has roads named after Confederate generals, he said.

“And the white guy’s the one who feels like his country’s being taken away from him,” Stewart said.