Fresh off the major success of her film Selma, which followed the heroes of the Civil Rights Movement, director Ava DuVernay is reportedly being eyed by Marvel to help tell the story of its first iconic Black super hero.

Fans have long been taking to the Internet to pitch DuVernay as the best director for Marvel’s upcoming Black Panther film and it seems like the comic giant is pretty fond of the idea.

“Marvel has had discussions with DuVernay about taking the reins of one of its marquee comic book properties and while the studio is considering other directors, there is mutual interest in having her join the MCU,” The Wrap reports.

Chadwick Boseman, the 38-year-old star of 42 and Get On Up has already been cast to take on the role of the powerful African prince turned superhero. The film is not scheduled to hit theaters until July of 2018, so the Marvel team still has time to sift through other options for the job but it’s clear that DuVernay would certainly be a crowd favorite.

If DuVernay is selected as director, it means she will be making history yet again as the first woman and first Black person to ever direct a Marvel movie. It is fair to note, however, that Marvel hired Patty Jenkins to direct Thor: The Dark World before Jenkins decided to walk away from the film due to “creative differences.” Game of Thrones veteran Alan Taylor was selected to take her place.

So while Marvel has been applauded for bringing diverse characters to the big screen and even pushing certain Black and female characters to the forefront of the franchise, they have struggled to bring that same message of diversity to the players behind their blockbuster hits. 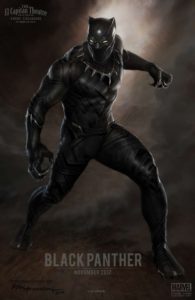 The comic giant is hoping to change that, especially as more pressure is being placed on Hollywood to stop turning up its nose to Black talent.

The Wrap also reports that there is a lot of pressure to get more female directors in Hollywood thanks to a new request from the American Civil Liberties Union. The ACLU is asking both state and federal agencies to launch an investigation into Hollywood’s hiring practices after alleging “rampant and intentional gender discrimination” is barring female directors from making it to the big screens.

The investigation request isn’t solely focused on Marvel but could obviously land them in some trouble considering the staggering lack of diversity in their directorial decisions.

Regardless of who is chosen to direct either of the films however, sources tell The Wrap that Marvel is insisting upon hiring a director that will reflect the star of the film. In other words, they hope to have a Black director behind the Black Panther and to have a woman take on Captain Marvel.