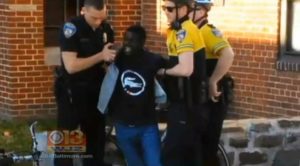 On April 19, a 25-year-old Black man was placed in the back of a police transport vehicle in handcuffs and leg restraints with no seat belt before suffering a fatal injury that left his spine severed.

Today, we are arguing about the specifics of the knife that was in his pocket.

One of the six Baltimore police officers that received charges related to the death of Freddie Gray is fending off claims that he unlawfully arrested Gray by insisting the knife was, indeed, illegal under state law.

It’s a claim that directly contradicts the statement made by the city’s top prosecutor.

Attorneys for Officer Edward Nero are requesting that Maryland State’s Attorney Marilyn Mosby release images of the knife that Gray had at the time of the arrest but she has refused to oblige.

If it is proven that the knife was illegal under state law, it could essentially cause the foundation of the charges against Nero to crumble.

According to the police reports, Gray was carrying a “spring-assisted, one hand-operated knife” that violated city law, The Baltimore Sun reported.

While city law does prohibit the sale or possession of “any knife with an automatic spring or other device for opening and/or closing the blade,” experts explain that the distinction between a legal and illegal knife under such a law can be blurry.

“An automatic knife means all you do is push a button and the blade pops out,” explains Michael Faith, a marketing director for Henderson’s Sporting Goods in Hagerston, as reported by the Huffington Post. “A lot of knives will have a little spring assist so when you push it open with your thumb, the knife will open up pretty much by itself.”

So the presence of a spring in the knife may not be the deciding factor in the knife’s legality.

Even as the debate over the mystery knife wages on, however, Mosby insists that this is no argument for the public. It’s one that needs to take place in the courtroom.

“While the evidence we have obtained through our independent investigation does substantiate the elements of the charges filed, I refuse to litigate this case through the media,” Mosby said in a public statement. “The evidence we have collected cannot ethically be disclosed, relayed or released to the public before trial.” Deciding to keep the great knife debate out of the media is, on the surface, a move to simply protect the integrity of the case at hand.

Underneath its surface, however, that decision has done something much greater.

Whether intentional or not, Mosby’s refusal to open the Pandora’s box of questioning what kind of knife Gray had will ultimately bring a quick end to the debate in the national eye and the media will have to continue looking to the real issues in order to continue coverage of Baltimore.

There won’t be any calling of experts to inquire about an image of a particular knife floating around the news hole.

Attempts to label Gray as nothing more than a criminal will seem out of place.

Accusations that these frustrated communities are unfairly lashing out at police brutality will be void of another peg to support an already faltering claim.

Instead, deeply rooted issues will have a better chance of maintaining the national spotlight.

Issues of police brutality, the realities of the vicious cycle of poverty, a racially biased justice system and disparities in education may be further discussed and analyzed with hopes that  these long-standing problems will finally be met with solutions.