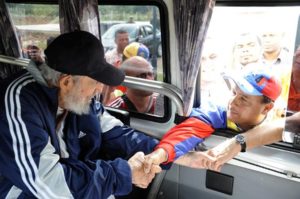 It’s quite fitting that former Cuban President Fidel Castro would choose the occasion of a visit to Cuba by a delegation of Venezuelan officials to make his first public appearance in more than a year, quieting all rumors of any major decline in his health.

Castro, 88, has long had an extremely close relationship with Cuba’s neighbor to the south, with their mutual longtime hostile relations with the U.S. as one uniting factor. In the decades since the collapse of the Soviet Union, Venezuela has forged a strong bond with Cuba, in addition to using its great oil wealth to provide Cuba with considerable financial assistance.

The newspaper story said Castro spoke of “multiple details about life in Venezuela, especially now that this great nation has become the bull’s-eye for imperial greed,” in a clear reference to the recent U.S. sanctions on Venezuela that declared the South American nation a national security threat.

Since President Obama and Cuban President Raul Castro, Fidel’s brother, announced plans to normalize relations between the two countries, there has been rampant speculation about how Fidel felt about the move. Most observers expect that Raul—who has been running the country for almost nine years—wouldn’t make such a monumental move without Fidel’s consent, but in his absence from the public eye the void was filled with all manner of rumors about Fidel’s possible displeasure.

Cuba released pictures showing a seated Castro shaking hands with the visiting Venezuelans through the window of his vehicle. He was wearing a baseball cap and a windbreaker. The meeting actually took place five days ago.

According to the newspaper account, “Fidel is full of vitality.”

Reuters said Castro hasn’t been seen in public since Jan. 8, 2014, when he attended the opening of a Havana cultural centre sponsored by one of his favorite Cuban artists, Alexis Leyva, alias Kcho.