While the number of people in support of interracial relationships is on the rise, when it comes to online dating, few people are actually opting to pick matches outside their own race.

A recent study found that while the overall number of interracial relationships in America has grown in recent years, OkCupid and Tinder users rarely picked online matches who were of a different race.

Researchers explained that there are several factors that could contribute to the daters’ hesitancy to go for users of other races, including things like sharing similar experiences and cultural values, but the founder of one of the nation’s most popular dating sites said that idea is just a myth.

People of the same cultural background do tend to have certain things in common based on their backgrounds and how they are treated by the population at large, but the Harvard-educated founder of OkCupid, Christian Rudder, said users are actually just as compatible with people of other races as they are with their own.

Back in 2009, a blog post on the dating site explained that there is actually very little variation in how people of difference races are matched up with other users based on the site’s compatibility algorithm.

In fact, some races were actually more frequently matched with a person of another cultural background.

According to Rudder, Hispanic men tended to be more compatible with Black and Middle Eastern women than they were with Hispanic women.

It is important to note, however, that the margins were not statistically significant.

The disparity comes when it’s time for online daters to pick who they decide to message and respond to.

Studies revealed that Black men and women received far fewer responses than their white counterparts, and multiracial users typically saw the most responses.

So while many users say they are supportive of interracial relationships, their behavior online certainly suggests otherwise.

“OkCupid users are certainly no more open-minded than they used to be,” Rudder wrote in a blog post. “If anything, racial bias has intensified a bit.”

“Both men and women of all political persuasions act as if they prefer same-race relationships even when they claim not to,” researchers wrote. “As a result, the gap between conservatives and liberals revealed same-race preferences, while still substantial, is not as pronounced as their stated attitudes would suggest.”

The researchers said the attitudes of online daters aren’t examples of overt racism but are instead signs that people have “inaccurate beliefs about their own preferences.”

Another online dating study suggested those dating patterns were actually proof that some people associated race with class and that class was what was really driving their behaviors online.

When Anne Helen Petersen, a BuzzFeed writer, created a makeshift Tinder for a study, she found that most of the test participants responded well to certain Black profiles.

In fact, both of the top-performing faux profiles used Black models. 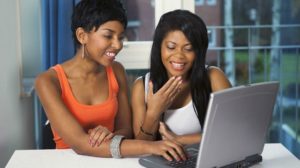 The catch, however, was that both of the models read as college-educated, middle-class users with nothing in their backgrounds linking them to African-American culture.

According to Petersen, online daters were really concerned about class and often “used race as a marker” to determine class even if it happened subconsciously.

When it comes down to it, however, many daters found that once they gave users of other races a chance, they were more open to dating more people from that race.

A 2013 study from University of California researchers found that after OkCupid users received messages from people of other races, they were more likely to continue interactions with users of that race.

“After that first interracial contact, a person would, on average, increase their interactions with people of that race by 115 percent,” The Kernel reported about the study’s findings.

Researchers believe that this is evidence of a fear that online daters have about reaching out to other races.

Once people get over that fear of crossing racial lines, they are more open to continuing interactions with that race as long as that initial interaction is positive.

For now, however, researchers predict that most online daters will continue gravitating toward people of their same background when deciding who they actually want to interact with.