It’s been more than two weeks since Rudy Lombard passed away due to complications from pancreatic cancer at the age of 75, but as the weeks go by those who knew the civil rights activist best are hoping his legacy will live on.

Many people will fail to mention Lombard’s name as they rattle off a list of some of the most important figures in the Civil Rights Movement.

Google searches won’t lead you to a Wikipedia page dedicated to the former New Orleans mayoral candidate and many people never heard Lombard’s name prior to him passing away.

He led and organized the McCrory’s sit-in, which was New Orleans’ first anti-segregation lunch counter sit-in, but he never cared much about letting people know he was the voice behind the spark of a powerful movement.

“Only rare have I met someone who lives by the old wisdom that there’s no limit to what can be accomplished if you don’t care who gets the credit,” political journalist Clancy DuBos wrote of Lombard. “Rudy Lombard was one of those rare individuals who never sought credit for the many great things he did. Rudy was one of the early leaders of the modern civil rights movement in New Orleans. He was a national vice president of the Congress of Racial Equality (CORE).”

Even during his run for mayor, Lombard was making a major difference in his community despite the fact that he finished the race in a distant fourth place.

During the race, it was Lombard who put the pressure on candidates to make public housing a major political issue and bring it to the forefront of the public’s agenda.

Lombard was a man who earned the right to brag and boast but he never put himself before the greater cause.

According to Lombard’s brother, Judge Edwin Lombard, that’s what made him so amazing.

“The most amazing thing about Rudy was that he was so reluctant to talk about himself and his contribution to the (civil rights) movement,” Judge Lombard said, according to New Orleans publication Gambit. “I used to be angry about the fact that Rudy paid his dues and never got any note for it. He would just shrug it off and say, ‘Don’t worry about it. There’s plenty to go around—plus you know it. That’s enough.’ It bothered me, but it never bothered him.”

Hubbard worked with Lombard to help drive some of the Freedom Riders to Mississippi in the 1960s and said Lombard was always a man who turned passion into action.

“We were sitting in the kitchen at Oretha Castle’s house,” Hubbard said as he recalled how Lombard led the McCrory’s sit-in. “We asked ourselves, ‘How can we organize a sit-in?’ Rudy said, ‘Leadership!’ When we asked, ‘How can we get us a good leader?’ Rudy said, ‘Well, I’ll show you. Let’s go. We’re going to Canal Street.’ It all started from there…He never hesitated to take that first step.”

Lombard’s name isn’t known across the nation but there is no arguing that he was a “driving force” behind desegregation and the national civil rights movement.

In addition to being a humble but prominent leader, Lombard was incredibly intelligent and encouraged his brother to read as much as possible. “He made me read,” Judge Lombard said. “Any book he brought into the house, I better be prepared to discuss it. He made sure that I was prepared.”

Lombard did so much reading that he had all sorts of information about various topics.

For Judge Lombard, his older brother was his “Google before the Internet.”

“If I needed to know something, I ‘Rudied’ it,” he added.

All of the people who spent their lives witnessing Lombard’s selflessness wanted the leader to get the credit he deserved. They wanted the rest of the nation to see what this one man was willing to do to give them a brighter future.

As they all bid farewell to the beloved leader who was often left in the shadows, DuBos believes that a man like Lombard still isn’t done making changes for the sake of others.

“In fact, if it’s possible to make things better in heaven, Rudy’s already organizing the effort,” he wrote of Lombard. “And this time, he’ll get the credit he deserves.”

One thought on “The Quiet Voice Behind a Powerful Movement: Loved Ones Remember Civil Rights Leader Rudy Lombard After He Passes Away at 75” 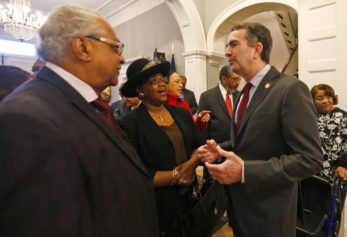