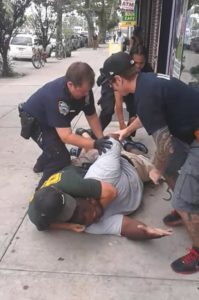 The study released over the weekend revealing that Black men are 21 times more likely than white men to be killed by the police will undoubtedly be received in some quarters of the country as evidence that the policing system is working just the way it is supposed to work.

That supposition is based on another recent study that found the more white people are told the criminal justice system is racist and unfair to Black people, the more they like it. That study by researchers from Stanford University, published in Psychological Science and released in August, found that even when whites believe current sentencing laws are too harsh, they’re less likely to support changing them if they’re reminded that the current U.S. prison population is disproportionately Black.

This latest finding is a classic case of inequity in the system. Death by police — you can’t get more consequential than that.

The study was done by ProPublica, the nonprofit specializing in investigative journalism, analyzing federally collected data on police shootings — data that wasn’t even complete because not every municipality reports its numbers to the feds, particularly when it comes to cataloguing deaths by its police force. ProPublica looked at the 1,217 deadly police shootings from 2010 to 2012 captured in the federal data  and found that Black males age 15 to 19 were killed at a rate of 31.17 per million, while just 1.47 per million white males in that age range died at the hands of police.

In other words, over those three years, 185 more white males would have had to have been killed by police for white males to be at equal risk of death by police, according to the ProPublica analysis. That works out to more than one a week.
ProPublica conceded that its analysis is necessarily incomplete because “vast numbers of the country’s 17,000 police departments don’t file fatal police shooting reports at all, and many have filed reports for some years but not others,” the nonprofit said. For instance, police departments in Florida haven’t filed reports since 1997 and New York City hasn’t reported data since 2007. But because at least 1,000 departments have reported consistently over the past 33 years, ProPublica felt confident enough to say the data revealed important trends.
David Klinger, a University of Missouri-St. Louis professor and expert on police use of deadly force, told ProPublica that racial disparities in the data could result from “measurement error,” but conceded that was unlikely. He said the disparity between Black and white teenage boys is so wide, “I doubt the measurement error would account for that.”

ProPublica found that there were 41 teenagers age 14 or younger killed by police between 1980 and 2012. Of those, 27 were Black, eight were white, and four were Hispanic.

The overwhelming majority of the killings were by white officers. Black officers account for a little more than 10 percent of all fatal police shootings.

Under what circumstances did these boys die? In 151 cases, teens were killed fleeing or resisting arrest at the time of the encounter — and 67 percent of those killed in such circumstances were Black. In the years between 2010 and 2o12, of the 15 teens shot fleeing arrest, 14 were Black.

3 thoughts on “Black Men 21 Times More Likely Than White Men to be Killed by Police; Is This How the System Is Supposed to Work?”