Alek Wek was 19 when she was approached by a model scout from a top London agency at a fair in Crystal Palace Park. Her mother, she remembers, was horrified, thinking her daughter was about to become a Page 3 girl. She laughs loudly: “I had to point out that I wasn’t really built for that.” Wek, one of the most successful models of the past two decades, has inherited her father’s height and extraordinarily long limbs, her mother’s cheekbones and her “little booty and big smile”, but she’s not exactly glamour-girl material. But the agent persisted, finally convincing Wek’s mother that theirs was a reputable agency, and her daughter’s career began.

She went to New York and had been there barely a week when Ralph Lauren booked her to open and close his catwalk show (the spot normally reserved for the big model of the moment, not a newbie). Calvin Klein, Isaac Mizrahi, Todd Oldham and Anna Sui followed suit. Wek was booked to star in Tina Turner’s GoldenEye video, named Model of the Year by i-D magazine and, in 1997 (less than a year after starting out), became the first African model to appear on the cover of Elle magazine.

Wek was born in South Sudan, arriving in London when she was 14, and was acutely aware of how different she was from the other big models of the day, women such as Kate Moss, Claudia Schiffer and Eva Herzigova; while growing up, she had no knowledge of trailblazers such as Iman and Grace Jones. “There was no concept of fashion and catwalk shows where I came from,” Wek says. “There were no magazines. I never saw women in makeup, or with different hairstyles. Absolutely not.” Now, she says, there are so many South Sudanese girls working as models it is not a big deal; in the late 1990s, she was one of very few successful African models. “There were black models, but no one as dark-skinned, and none with Dinka features, that’s for sure.” Even so, she was regularly mistaken for Naomi Campbell, an entirely different-looking model from Streatham with a Jamaican-born mother. She laughs at the ridiculousness: “A Black woman is not ‘a type’. I never had any interest in those jobs that asked for only Black girls. What the hell is that? Would you be comfortable saying you wanted only white girls, or Latin? Are you kidding me? It’s baffling.”

At a time when Black models were considered commercially more viable if their hair was relaxed, their complexions light, Wek (very dark skin, cropped natural hair) was confident of her value. I have interviewed many models and, without fail, when asked if they always knew they were beautiful, each of them has given me a look of mock horror before going on to list their unsightly features as a child: big feet, too tall, gawky features. But when I ask Wek, she immediately replies, “Oh yes, of course.” 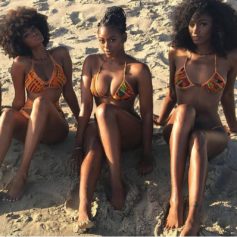