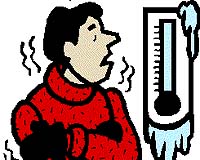 Burn those extra calories by shivering.

Researchers at Maastricht University Medical Center in the Netherlands, have discovered that exposure to mild cool temperatures may increase fat burning by boosting the body’s metabolic response rate up to 30 percent.

When a body is cold its natural response is to shiver; this is a short-term biological response, called shivering thermogenesis (ST), which protects humans from hypothermia. But another type of biological response, called non-shivering thermogenesis (NST), activates in milder cold temperatures and also increases heat output, but the person doesn’t feel the body’s response so it does not cause discomfort.

In a cold environment, the body uses energy to generate heat, but because of modern indoor climate -controls, most people do not have to put much effort into staying warm.

The researchers, whose findings were published in the journal Trends in Endocrinology and Metabolism, examined various prior experiments that subjected humans and rodents to mild temperature , and conducted a parallel experiment. Seventeen people spent six hours a day in a 59-degree temperature-controlled room. The participants were comfortable and acclimated after ten days, and researchers believe that NST led to an increase of healthy brown fat.

Brown fat, is the type of fat in the body that “insulates heat” and has been shown to eat away at the “bad fat.”

“We do have clear evidence that cold adaptation increases energy expenditure,” says study author Dr. Wouter van Marken Lichtenbelt, an associate professor in the department of human biology at Maastricht University Medical Center. i”There is no doubt in this respect. How pronounced these effects are in everyday life, especially in the long term, is not yet known.”

The work is largely theoretical, and it’s too early to measure the calories burned by this process. Currently, the researchers are aiming to pinpoint the exact physiological basis for NST so people can benefit optimally from its potential benefits.

In the meantime, the researchers advocate for temperature training, defined as more regular exposure to mild cold, to be integrated as part of a healthy and active lifestyle. Sunlight Can Help You Shed the Pounds