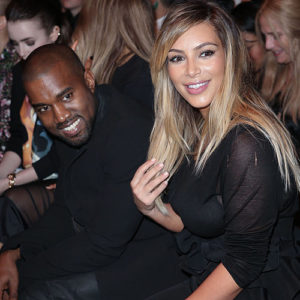 Kanye West has taken his Kim Kardashian obsession to a new level as he claims that Kim is more influential and more deserving of the cover of Vogue than first lady Michelle Obama.

If you thought West’s bragging about how great he is was the most obnoxious he could get, think again.

Kanye gets even more unbearable when he starts bragging about his fiancee, Kim, and claims she pulls more rank the first lady of the United States.

To make that claim even more outrageous, Kanye was actually referring to Kim’s fashion sense.

“There’s no way Kim Kardashian shouldn’t be on the cover of Vogue,” he told Ryan Seacrest on Tuesday morning during an On Air With Ryan Seacrest interview. “She’s like the most intriguing woman right now. She’s got Barbara Walter calling her like every day.”

That wasn’t the end of his Kim-obsessed rant.

“And collectively, we’re the most influential with clothing,” he added.

It’s only fair to point out that Kim has rocked a dress that the TV show Fashion Police could only describe as the “bird poop dress” and another inspired by every grandma’s floral print sofa, and yet neither of those styles have caught on so maybe “influential” isn’t the right word here.

He went on to say, “No one is looking at what [President Barack Obama] is wearing. Michelle Obama cannot Instagram a pic like what my girl Instagrammed the other day.”

Nor would anyone want her to. In fact, there weren’t too many of us who actually wanted Kim to Instagram the picture of her butt devouring a white monokini either.

The irony is that Kanye is talking about how badly his girl deserves to be on Vogue, but her poor fashion sense caused editors at the magazine to make a decision that they have rarely ever made before. Usually when a celebrity is featured on the best-dressed list for an event, their partner is left in the picture if they have snapped all their photos as a couple. But not in this case.

Remember the Met Gala? Kim Kardashian’s floral print disaster dress caused Vogue to crop her out of the picture so they could feature West as one of the best dressed on the carpet that evening.

At the end of the day, it seems like Kanye is trying to make people believe that he is engaged to the type of influential woman that his best buddy Jay Z is married to.

The difference is that the truly influential women like Michelle Obama and Beyonce don’t have to try to convince people they are influential.

Meanwhile, Kanye let everyone know that he doesn’t care about their opinions regarding Kim.

“That’s not my concern,” he said. “My concern is doing God’s work, and He’ll work everything else out.”

Kim also revealed that she’ll be taking on Kanye’s last name once they get married, but that doesn’t mean the Kardashian clan title is going away.

“It’ll be Kim Kardashian West,” she told E! News on Friday during her 33rd birthday party at Tao Las Vegas. “Not hyphened. Maybe make [Kardashian] like, the middle.”

As for wedding plans, Kim admitted that she hasn’t thought about it much and she is willing to let Kanye take over the entire ceremony.

“We honestly haven’t had a moment to talk about it or even breathe,” she said. “So we haven’t really talked about it, but whatever he wants.”

Her relaxed nature about the ceremony is only natural considering she’s already made her way down the aisle twice before. But since this is Kanye’s first time, he’s probably eager to have an extravagant ceremony.