As Secretary of State Hillary Clinton meets today with African Union chairwoman Nkosazana Dlamini-Zuma, they are slated to discuss a list of issues that neatly illustrate the traumas confronting modern Africa—and demonstrate why much of the rest of the world is plagued by a severe case of calamity fatigue that keeps the media and the public from focusing more attention on growing catastrophes like that in the Congo.

The menu of the Clinton meeting will include marauding rebels in eastern Congo, deadly terrorists in northern Mali and powerful Islamic militants in Somalia—a litany of problems overwhelming governments across the continent.

For too many people in the United States, even in the African-American community, when they hear reports of African instability, the problems sound so massive, so distant and so resistant to solutions that the temptation is to turn off and turn away—particularly when the nations don’t appear to involve any crucial American interests or constituencies. But that impulse would be exactly what the various rebel forces in these nations are banking on as they spread their death and destruction—the disinterest of the rest of the world.

The lack of attention to the Democratic Republic of the Congo has been particularly painful for that nation’s women, living in a place that the UN has labeled the “rape capital of the world.” A study last year spearheaded by the The Center for Health Services and Outcomes Research, Graduate Program in Public Health, at the Stony Brook University School of Medicine found that about 1,152 women are raped every day in the Congo—which means 48 raped every hour, or four women raped every five minutes. In the U.S., where the Department of Justice estimates that 0.5 women are raped per 1,000 women aged 12 and up annually, the study shows that women in the DRC are 58 times more likely to be raped annually.

“The study creates another compelling argument that sexual violence in the DRC is not only a grievous mass violation of human rights but is a security threat to the entire DRC,” said Michael VanRooyen, M.D., M.P.H., Director of the Harvard Humanitarian Initiative. “While there are certainly limitations to the use of these data, the message is important and clear: Rape in the DRC has metastasized amid a climate of impunity, and has emerged as one of the great human crises of our time.”

A climate of impunity. That is exactly why these crises in Africa have been able to thrive, because of the impunity of the rest of the world. Even on the continent itself, too many leaders are so eager to tell the good news story of Africa’s rebirth and emerging economic power that they are reluctant to get involved in nation’s where chaos rules the day.

In addition to the rape of Congolese women, the Congo is also dealing with death and widespread homelessness as tens of thousands of Congolese are forced to flee their homes in towns like Sake and cities like Goma to escape the march of the M23 rebels.

The meeting between Clinton and Dlamini-Zuma will be joined by U.S. Assistant Secretary of State for African Affairs Johnnie Carson, who just returned from talks with Congolese President Joseph Kabila and Ugandan President Yoweri Museveni about ending a rebellion in eastern Congo.

In this latest conflict, Congolese officials believe that the country of Rwanda, much more stable and orderly with a tough and disciplined army, is backing the rebels as a way of gaining control of the mineral-rich eastern region. The conflict also has roots in the genocide that took place in neighboring Rwanda 18 years ago, when the Tutsi ethnic group was almost extinguished in a chilling massacre by the Hutus. Now the Tutsis have re-emerged in the form of these new rebels, called the M23, who are made up almost exclusively of Tutsis. Rwandan President Paul Kagame is also a Tutsi. More than 2 million Hutus fled Rwanda into the Congo after the genocide, fearing the new Tutsi-led government would be intent on revenge. With million of Hutus in the Congo, the Rwandan government has been accused of backing the Tutsi militias in their efforts to overthrow the DRC government.

As the M23 rebels rode into Goma, an important population and economic center with about a million residents, the Congolese army actually ran away and about 1,500 UN peacekeepers didn’t lift a finger to stop the rebels. The M23 have caused as many as 100,000 people to flee their homes, according to aid organizations such as Oxfam and UNICEF. Nearly half a million Congolese already live in camps because of the decades of violence. Aid groups are struggling to get food and supplies to them.

During his trip, Ambassador Carson met with Rwanda’s foreign minister but he didn’t meet with Rwandan President Paul Kagame, who denies that he is backing the M23 rebels.
State Department spokeswoman Victoria Nuland says Secretary Clinton and AU Chair Zuma are working for an end to the fighting and humanitarian access for those displaced.
“We want to see Rwanda use its influence, if it has it, with the M23 to get a cease-fire, get a rollback to the July 7th lines, and to participate actively in a conversation among Museveni, Kabila, Kagame on how to deal with the political and economic grievances in Eastern Congo,” she said.

Nuland says the meeting will include West African plans for an intervention force in Mali, where Tuareg rebels and al-Qaida-affiliated terrorists control most of the north of the country.

“In Mali we’ve talked a lot about trying to split off moderate Tuaregs, get them into a conversation with the interim government about a way forward that meets the human, economic and political needs of that population so that they are not drawn to terror, so they are not drawn to separatism. So that will be part of the conversation as well,” she said.
As for Somalia, Nuland says Clinton and Zuma also will discuss Somalia, where a new government has taken charge in Mogadishu after an East African intervention force regained ground lost to Islamic militants. In September, Kenyan troops invaded the Somalian port city of Kismayo as part of an African Union military effort to drive the radical Islamic group al-Shabab from its last stronghold in the war-torn country.

One thought on “Turmoil Brews in Congo, Mali, Somalia, As the World Looks the Other Way” 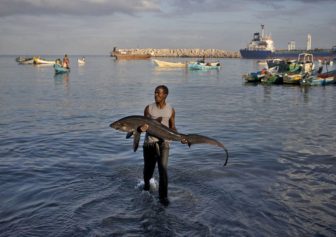