Post-Halloween madness ensued this morning, as news broke that Chris Brown showed up dressed as a terrorist last night for Rihanna’s Halloween party in West Hollywood.

Breezy posted an Instagram picture of himself and his crew dressed in turbans and pointing fake guns. The group later attended Rihanna’s party at the Greystone Manor.

Even more shocking is the response from his mother, Joyce Hawkins. Hawkins defended Brown and the outfit Thursday: “HALLOWEEN IS FOR FUN NOTHING MORE THAN JUST FUN. GET A LIFE PLEASE,” she sounded off on her Twitter account.

After followers posted a round of negative comments, Mama Breezy responded with another tweet: “SO DOES THIS MEAN WHEN WE DRESS OUR KIDS AS SATAN WE GLORIFYING HIM OR IT JUST OUT OF FUN???? WE NEED TO HELP THE PPL ON THE EAST COAST.”

Regardless of his mother’s downplaying, Brown’s costume is yet another public demonstration of violent subject matter.

Earlier this fall, Brown posted another controversial photo on Instagram, of a new neck tattoo depicting a battered woman’s face. Many claimed the tattoo resembled the bruised face of Rihanna after the couple’s infamous blow out before the 2009 Grammy Awards. 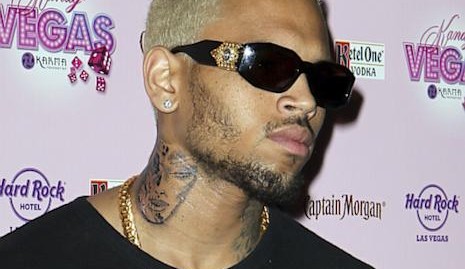 Indeed, Brown’s current relationship with Rihanna remains under question. The on-again-off-again couple musically reunited earlier this year for a series of remixes (her “Cake” and his “Turn Up the Music”) and reportedly reconciled romantically over the summer. Rihanna even dined with Brown’s mother earlier this week at the Montage Hotel.  Then, of course, Breezy attended the Halloween 2012 Carnival held at the Greystone last night, where Rihanna served as Halloween Queen.

However, the two have yet to publicly confirm the status of their relationship. Rihanna remained coy in her August Oprah interview, noting  “we have maintained a very close friendship ever since the restraining order was dropped.”

What does remain certain though, is Brown’s willingness to joke about violence—whether through his tattoos or Halloween costume. While his mother and Rihanna may preach forgiveness, if Twitter is any indication, the public may not follow suit.