Nicole Murhpy and her fiance Michael Strahan have their own rumors to deal with but the former New York Giants football player decided to address rumors from his previous marriage.

Strahan was married to Jean Muggli (see photo left) in 1999, it would later end in divorce in 2006. During the proceedings Muggli accused Strahan of “videotaping her sister, beating her, and repeatedly cheating.” Strahan’s ex-wife was awarded $15 million in the divorce settlement and another $18k/month for child support.

For the first time, the newly minted talk show host on Live with Kelly and Michael is addressing the charges. Strahan sat down with Bryant Gumbel’s “Real Sports” to clear his name..finally.

“I think early on when you’re reading all these things in the paper that aren’t true — I’m not an adulterer. I’m not gay. I mean, I didn’t beat anybody.”

Gumbel noted that despite the nasty accusations, Strahan’s public persona remained in tact. “….the thing that I find the most surprising about it is in retrospect, your public image didn’t take a hit.”

“People don’t care,” Strahan replies. “Everybody has their own problems . . . I just kept go on being myself and it worked.”

Meanwhile Strahan and his current fiance Eddie Murphy’s ex-wife Nicole were reportedly on the rocks over inappropriate texts sent by the latter to R&B singer London.

Murphy appeared in London’s video “No Panties” and the two reportedly exchanged texts.

Despite the rumors both Strahan and Murphy have denied them on Twitter. “Wow! Thats insane! Lol!“ tweeted Murphy. London also recently denied the tryst.

“I don’t know what’s the controversy. She’s a sexy lady … If they have anything going on it has nothing to do with me.We had great chemistry on set,” but he insists, “Everything was professional.” 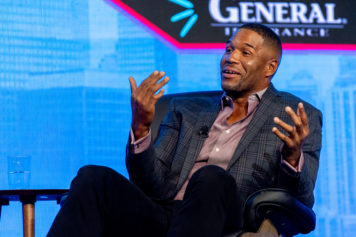