After Kanye West took the mic from Taylor Swift, Alicia Keys, Jay-Z, and Lil Mama had one of the most unforgettable moments at the 2009 MTV Video Music Awards. If you remember, rapper Lil Mama crashed the stage during Keys and Jay-Z’s “Empire State of Mind” performance. It ended with Alicia Keys and Jay-Z standing with their arms folded, while Lil Mama appeared to be in a lane all her own.

In an interview with “The Morning Hustle” show on Wednesday, Oct. 22, Keys said she forgave Lil Mama for bombarding their performance, although she had no idea she was on stage.

“Till this day I never knew she was even on the stage. That’s the craziest part of the whole thing for me,” Keys admits. “I was on that stage. Jay was in the middle. She was on the other side of Jay and I never saw her. Never. So that was wild to me.”

She added that “I really think she felt the energy of the record and she loved and she couldn’t hold herself back. This is what my music does to people. What can we say?”

Fans ridiculed Lil Mama and nearly canceled her music career after the incident. Earlier this year in April, the “Lip Gloss” rapper revealed that Alicia Keys and Jay-Z have ignored her since. Lil Mama previously addressed the incident in a 2015 Complex interview, revealing the backlash led her to miss other opportunities and have suicidal thoughts. 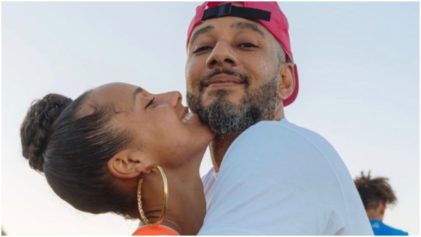