The city of Columbus, Ohio, has agreed to pay the family of Andre Hill $10 million, City Attorney Zach Klein announced on Friday, May 14.

“We understand that because of this former officer’s actions, the Hill family will never be whole,” Klein said in a statement. “No amount of money will ever bring Andre Hill back to his family, but we believe this is an important and necessary step in the right direction.”

Hill, 47, was unarmed when he was fatally shot by now fired Columbus Division of Police officer Adam Coy in December after officers responded to a non-emergency call about someone turning a vehicle on and off in a neighborhood.

In addition to the financial settlement, the agreement also specifies that the gymnasium inside the Brentnell Community Center in Columbus will be renamed the Andre Hill Gymnasium. Hill often visited the center and Michael Wright, an attorney for the family, explained that it was “very important” to Hill’s family members that the gymnasium be renamed in his honor.

“That was a place that he spent a lot of time and a place that is very meaningful to their family,” Wright said. “To have that done makes them very happy.

The name change will take place by the end of the year.

On Dec. 22, Coy and another officer, Amy Detwiler, responded to a neighbor’s non-emergency call about someone turning a vehicle on and off repeatedly and playing loud music at a nearby home.

When the officers arrived at 1:37 a.m., Hill, who was a visitor at the residence, was standing in the garage with a cellphone in his left hand. Coy and Detwiler approached with their weapons drawn as Hill walked closer with the phone still in his hand. Within 10 seconds of approaching the garage, Coy fired four shots, striking Hill once in the chest and three times in his right leg. About 10 minutes passed before any life-saving measures were performed, and Hill died les than an hour later at a hospital.

Neither officer turned on their body-worn cameras until after shots were fired, but the devices’ lookback feature captured the shooting without audio.

In February, the Columbus City Council unanimously approved Andre’s Law, a piece of legislation that requires officers to turn on their body cameras during any police enforcement action and provide first aid following a use of force incident.

Coy was fired on Dec. 28 after Columbus Safety Director Ned Pettus Jr. said he would uphold Chief Thomas Quinlan’s recommendation that he be terminated. In April, Coy was indicted on a charges of murder, felonious assault and reckless homicide. He has pleaded not guilty and was released after posting $1 million bond.

The Hill family’s legal team, including Wright, Ben Crump, and Richard W. Schulte, thanked the city for “doing the right thing” by agreeing to the financial settlement and to renaming the gymnasium.

“Now all those involved can begin to heal,” the statement said.

The $10 million settlement is the largest ever paid out by the city and will move to the city council for a vote on May 17. It will be paid out of the Department of Public Safety’s budget. An amendment to the agreement signed Thursday requires that the payment be made as a single payment due immediately upon court and city council approval.

According to Wright, the family is not yet satisfied.

“From their perspective, they are still hopeful for justice,” he said. “A conviction. That’s what they’re waiting for.” Under the agreement, Coy, Detwiler, a list of 16 other named officers, and any other CPD officer involved in the incident cannot be the subject of future court actions in relation to Hill’s death. 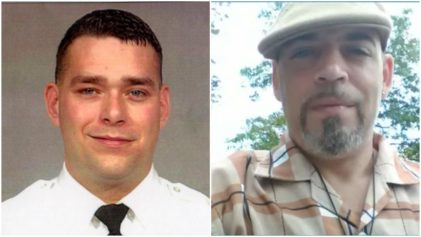 ‘Andre Hill Should Not Be Dead’: Ohio Ex-Officer Who Killed Unarmed Black Man After Non-Emergency Call Indicted on Murder Charge