NASCAR announced on June 21 that a noose was left in the garage stall of driver Darrell “Bubba” Wallace Jr. before Sunday’s scheduled Cup race at Talladega Superspeedway in Lincoln, Alabama, on Sunday. The FBI has since launched an investigation.

Wallace, born to a white father and Black mother, is NASCAR’s only Black full-time driver. Earlier this month, the racing company said it would ban the Confederate flag at all of its venues after receiving a call from Wallace about it.

The decision comes at a time when protests for racial justice have been going on across the United States, and various industries are making changes on how they deal with race.

Some against NASCAR’S decision drove past Talladega Superspeedway’s main entrance and flew Confederate flags. There was also a plane that flew above that pulled a Confederate flag and a banner that read “Defund Nascar.”

On Monday U.S. Attorney Jay Town said his office and the Justice Department’s Civil Rights Division also are looking into the noose incident.

“Regardless of whether federal charges can be brought, this type of action has no place in our society,” Town said in a statement.

The sanctioning body started its own investigation and said whoever left the noose would be eliminated from NASCAR events permanently. In 2015 former NASCAR chairman Brian France attempted to ban Confederate flags being displayed at its venues, but his proposal never took.

“We are angry and outraged, and cannot state strongly enough how seriously we take this heinous act,” NASCAR said in a statement. “As we have stated unequivocally, there is no place for racism in NASCAR, and this act only strengthens our resolve to make the sport open and welcoming to all.”

Alabama Gov. Kay Ivey also responded to the racist act and said she was “shocked and appalled” by it.

“There is no place for this disgusting display of hatred in our state,” said Ivey in a statement. “Bubba Wallace is one of us; he is a native of Mobile and on behalf of all Alabamians, I apologize to Bubba Wallace as well as to his family and friends for the hurt this has caused and regret the mark this leaves on our state.”

Wallace sent his own statement about the noose on Monday, June 22.

“Today’s despicable act of racism and hatred leaves me incredibly saddened and serves as a painful reminder of how much further we have to go as a society and how persistent we must be in the fight against racism,” he wrote. “Over the last several weeks, I have been overwhelmed by the support from people across the NASCAR industry including other drivers and team members in the garage.”

“Together, our sport has made a commitment to driving real change and championing a community that is accepting and welcoming of everyone,” the message continued. “Nothing is more important and we will not be deterred by the reprehensible actions of those who seek to spread hate.”

“As my mother told me today, ‘They are just trying to scare you.’ This will not break me, I will not give in nor will I back down. I will continue to proudly stand for what I believe in,” wrote Wallace.

Earlier this month, Wallace responded to the death of George Floyd, the Black man who died on Memorial Day after a Minneapolis police officer drove a knee into his neck for nearly nine minutes as the handcuffed and prone man said he couldn’t breathe.

The 26-year-old Wallace wore an “I Can’t Breathe” T-shirt over his firesuit at a race in Martinsville, Virginia, and drove a car painted with the words “Black Lives Matter.” 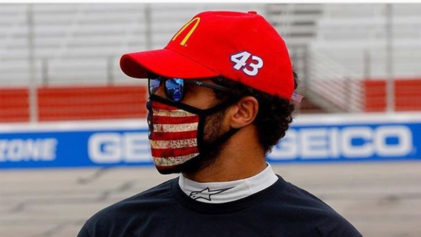