The mom of Georgia Tech football recruit who died by suicide earlier this week recently addressed the tragedy in a tearful video, recalling how her “happy” son was while simultaneously in the throes of mental and emotional anguish.

Bryce Gowdy, 17, was just a week away from starting classes at the Atlanta university when he took his life by jumping in front of a freight train in his hometown of Deerfield Beach, Florida, Monday. What was initially thought to be a freak accident was later ruled a suicide. 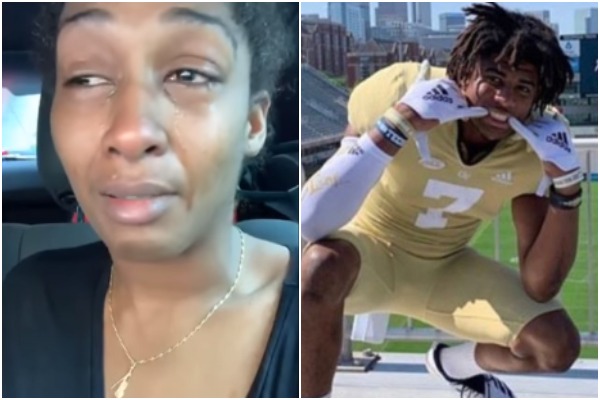 Bryce Gowdy’s mother Shibbon Winelle (left) said she “knew in my heart” that something was going on with her son (right) in the days before his suicide. (Photos: YouTube / GoFundMe)

In a video posted to YouTube on Tuesday, the teen’s mother, Shibbon Winelle, said her son was excited about going to play football at Tech but recently opened up to her about mental issues he was facing. A tearful Winelle said Gowdy had been “talking crazy” lately and describing the “signs and symbols” he saw.

“I knew in my heart he wasn’t [ok],” she said in the video. “He was talking in circles. The things he had to see me go through because we were homeless.”

The mother of three explained that her family had fallen on hard times and was struggling financially. The day of Gowdy’s suicide, Winelle said she and her kids were staying at a motel because they had nowhere else to go.

“I was stressed,” she continued. “I was too stressed to really deal with it. We were on the streets again, homeless. The little job I got wasn’t paying me my money on time or in full. I was so stressed about taking care of my kids.”

In the days before his death, the standout athlete began asking heavy questions about life and spirituality, according to his mother. She said Gowdy told her he was “starting to see the world for what it really is.”

“He was happy though … he was talking about his future,” Winelle added through sobs. “He was talking about going to Georgia Tech. He had a lot of questions about spirituality and life. He kept asking if I was OK, [and] if his brothers were going to be OK. I said, ‘yeah.'”

Thomas Gowdy, the teen’s uncle, recently told the South Florida Sun Sentinel that his nephew was nervous about going away and leaving his siblings in an unstable environment.

“He was a little stressed having the weight of the world on his shoulders by going [to a Division I school],” Thomas Gowdy explained.

ESPN reports that the 17-year-old four-star receiver recruit out of Deerfield Beach was considered one of the top-rated players coming into Tech as part of the No. 25-ranked class in the nation. He reportedly wrapped up his high school classes a semester early so he could join the Yellow Jackets family on Monday, according to the university.

Winelle, who was dealing with her own emotional issues, said she noticed a change in her son but told him to “toughen up” and “dig within” to fight his demons. It was so overwhelming she began experiencing chest pains, and her eldest tried comforting her as she sat in the car outside the motel.

“[Bryce] sat with me.  He tried to hold my hand,” she recalled. “I wouldn’t let him hold my hand because his energy was so intense. I could feel the pain in his soul and it was breaking my heart.”

Later that night after checking into their room, Winelle said she asked the teen to fetch her favorite blanket from the car. Twenty minutes passed and his mom grew worried but figured he’d be back, since he’d left his wallet, phone and shoes behind.

Winelle would later receive a call about someone killed near a freight train around 4 a.m. It was her son.

“In my heart, I knew it was my baby,” she said, through sobs. “My baby walked in front of a train.”

As the video ends, Winelle says that she had been “begging for help” for months but nothing had come through. A GoFundMe page set up to aid the family has since raised more than $100,000.

Watch more in the video below. Viewer discretion is advised.

If you or someone you know is in crisis or contemplating suicide, call the National Suicide Prevention Lifeline for help at 1-800-273-8255.