No, it’s not magic. It’s the system behind Moses West’s innovative machine that’s making it so communities in need have access to safe drinking water.

What’s more, folks are already pretty familiar with the science behind it all. Moses West, 61, developed a machine that can pull moisture from the atmosphere and turn it into potable water. (Photo: KVUE/video screenshot)

“We’ve always known there were three sources of water: a liquid, a solid and a gas,” West, a retired Army captain and engineer, told Atlanta Black Star in a recent interview. “Our atmosphere is [the] most abundant source of water we have. And now we have this technology in our hands … where we can tap into this water. To me, we’re in no-brainer territory.”

The U.S. Geological Survey says 0.001 percent of the world’s water is gaseous at any time.

West’s water-harvesting machine, called an atmospheric water generator, extracts moisture from the air, condenses it and turns it into water. With his device, the military vet has managed to provide millions of gallons of water to people in Puerto Rico, as well as families impacted by the ongoing water contamination crisis in Flint, Michigan.

Now, West is hoping to do the same in the Bahamas, which was ravaged by a monster hurricane that left thousands without homes, electricity or running water.

We’re “eliminating drought, we’re helping people around the world, helping people during hurricanes,” he said of his machines, which he also contracts to the military.

So how did it all start? The Columbus, Georgia native began studying cistern water systems after leaving the military for Australia, where he lived for 11 years before eventually moving back to the States. West, 61, got his first look at a water generator during his time in Hawaii, a small one belonging to his neighbor that could pool about 5 gallons of water.

From there, he knew he could make it bigger and better. 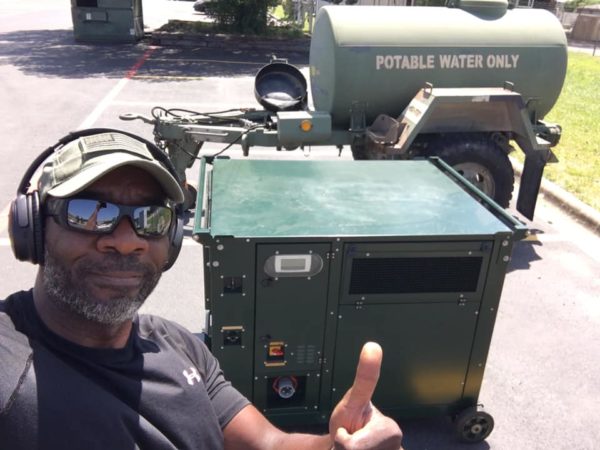 West would return to the Lone Star State to pitch the idea to U.S. Army engineers, spending many months demonstrating the water harvesting technology and how it works. He was also tasked with convincing Texas A&M University’s AgriLife Extension on his idea before the Army would agree to greenlight it.

After securing an investor, West was able to build the first machine of his own design in 2015. A 90-day trial run of the technology returned water quality that exceeded World Health Organization and U.S. water quality standards.

“I’ve taken this machine so far, and the technology to a whole new level,” West told ABS of his patented generator, adding, “We don’t have to operate inside this box anymore.”

The machine, which is about 800 square feet, generated 868 gallons of water per day (36.2 gal/hr) from July 1 to July 31, 2015, using just 638.1 kWhs of diesel fuel energy per day, according to a summary of testing results provided by West. The average daily humidity was 72 percent, making for an impressive amount of water generation.

“I’m walking … around in all that water that you need to supply this entire city with drinking water today,” the vet said of Austin, Texas, where he partly developed his first machine at Camp Mabry. “We are tapping into the best source of water we’ve got, and there’s no shortage of it.”

West’s grind hasn’t stopped, however, and the engineer said he’s constantly thinking of ways to better his already innovative system.

“I’ve completely dedicated myself to this because I’ve seen what it can do,” West added. “In Vieques, Puerto Rico … in Flint, people are absolutely amazed that somebody would come and do something like this for free.”

West is now raising money to take his water generator to the Bahamas to help those working rebuild after Hurricane Dorian. Many of his missions have been made possible through his nonprofit Water Rescue Foundation, which collects donations to provide clean drinking water to people in need.

The warmer and more humid the weather, the better the machine works, which is why West knows it would make a huge impact.

“And so the gift of giving is the capital,” he told ABS. “My capital is giving back and the joy that I get giving.”