When word hit in February that Colin Kaepernick and Eric Reid settled their collusion case against the NFL, the big question was for how much? However, due to a signed confidentiality agreement, the amount was never revealed. Now a report from the Wall Street Journal offers some details.

According to the publication, both players settled for less than $10 million, and there’s no word on how that money was split or what they had to pay their attorneys. The settlement was looked at by many as a victory when it was reached, but that talk has diminished since the amount was revealed. Colin Kaepernick (R) and Eric Reid (L) kneel in protest during the national anthem on Sept. 12, 2016 before playing the Los Angeles Rams. It’s been reported that Colin Kaepernick and Eric Reid had to split less than $10 million in their NFL collusion case. (Photo: Getty Images, Thearon W. Henderson)

Kaepernick filed his grievance against the NFL in 2017 after he accused the league of blackballing him for kneeling during the national anthem and speaking out against issues like racial injustice, as well as police brutality. The former San Francisco 49er began kneeling in 2016 and hasn’t played a game since March 2017.

His protests also sparked a national debate about whether it was disrespectful to kneel during the anthem, and Donald Trump blasted him and others for their actions. In fact, it was said that Trump’s hatred of the protests is what kept Kaepernick out of the league.

Reid, his former teammate, joined the collusion case last year, although he was picked up by the Carolina Panthers and received a three-year contract extension last month.

It’s safe to say that many were surprised at the amount when it was revealed because there were reports that it was for at least $50 million more. For example, Mike Freeman, an NFL columnist, gave a much heftier figure when he tweeted about the settlement last month.

“Number NFL team officials are speculating to me is the NFL paid Kaepernick in the $60 to $80 million range,” he wrote.

LeBron James, who’s been a big supporter of the quarterback turned activist, spoke about the settlement when it was reached and said based on what Kaepernick has been through, his payout should take care of his family for a very long time.

“You’ve got a guy who basically lost his job because he wanted to stand for something that was more than just him,” he said. “I’m happy to see the news come out yesterday that he won his suit. I hope it’s a hell of a lot of money, that can not only set him up but set his family up, set his grand kids up for the rest of their lives.”

Still, no one directly involved in the settlement has commented, and the attorney for Kaepernick and Reid said he’ll respect the terms of the confidentiality agreement by keeping mum. 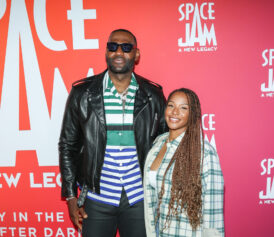