The “T.I. & Tiny: Friends and Family Hustle” reality star showed off her stylish Fashion Nova garb in an Instagram post on Friday. She donned a light brown shaggy sweater that retails for $39.99 on the brand’s website. She paired it with a pair of curve-hugging dark denim jeans, peach-colored stiletto heels, a black Chanel shoulder bag and gold rope necklace.

Wright seemingly posed for the fashion post on the balcony of her Atlanta home and wrote in her caption “Fashion Nova Friday.” 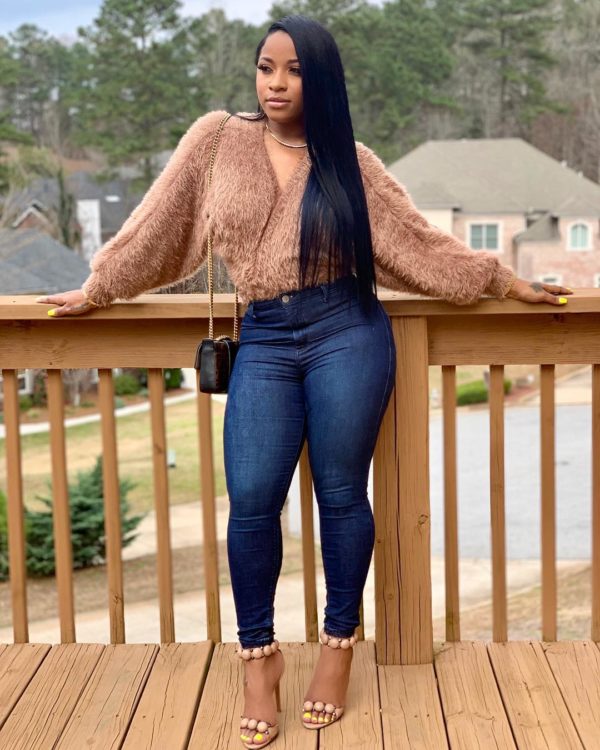 Although her outfit was a hit with several fans, folks gawked even more over the mother of two’s voluptuous figure.

Another person added, “Toya corn bread and cabbage fed 😍🔥 her body is on point.”

“I need the prayer, the vitamins, whatever Toya is taking face of a 16 year old body of a 25 yr old 👌🏿,” someone else commented.

Wright has been candid about getting back in shape since giving birth to her 1-year-old daughter last year. She’s currently on a weight-loss journey to lose a total of 15 pounds. She and her partner Robert Rushing have been going hard in the gym to get their bodies back on track.

It’s also important for the reality star to eat healthy and work out due to certain health issues. She told People magazine in 2017, she suffered from fibroids. She sometimes experiences excruciating pain, but said exercising and eating well often helps her manage it.

“I had to scale back and eat healthier things like fish and salads,” Wright noted. “I found exercising has been more helpful in relieving the symptoms.”

She continued, “I do a lot of cardio, like walking and cycling. At that time of the month, the fibroids flare up, and when I exercise it helps me not feel so much pain.”

‘You Can Look But Don’t Touch’: Reginae Carter Shows Off Her ‘Barbie’ Looks and Leaves Fans Head Over Heels