MOBILE, Ala. (AP) — The years have been hard on Africatown USA.

Established by the last boatload of Africans abducted into slavery and shipped to the United States just before the Civil War, the coastal Alabama community now shows scarcely a trace of its founders.

Industrial development choked off access to the Mobile River and Chickasaw Creek, where generations caught crabs and fish. Factories now occupy land that once held modest homes surrounded by gardens, fruit trees and clucking chickens. The population has plummeted; many of the remaining homes are boarded up and rotting.

But after years of watching the steady decline, descendants of the freed slaves who established Africatown are trying to create new ties and, perhaps, rebuild a community that’s in danger of fading away.

Relatives of the 110 people who were kidnapped in West Africa, shipped to the U.S. on a bet and sold into slavery are organizing a get-together called the “Spirit of Our Ancestors” festival, set for Feb. 9. Five families were involved in the initial planning, and organizer Joycelyn Davis said interest mushroomed once word got out. 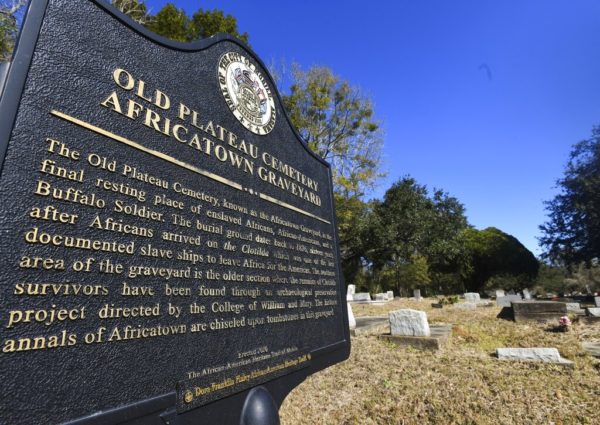 Old Plateau Cemetery, the final resting place for many who spent their lives in Africatown, stands in need of upkeep near Mobile, Ala., on Tuesday, Jan. 29, 2019. Many of the survivors of the Clotilda’s voyage are buried here amongst the trees. (AP Photo/Julie Bennett)

She said people who once were ashamed to say their ancestors were sold into slavery are finding new pride in their heritage that could breathe new life into Africatown.

“I am so proud to say I am a descendant. That wasn’t a word that I used maybe 10, 15 years ago,” said Davis, 42, a sixth-generation granddaughter of African captive Charlie Lewis. “It was shameful as a child.”

Africatown’s founders were shipped to the United States on a wager rooted in antebellum obstinacy.

A U.S. law banning the importation of slaves had taken effect in 1808 — nearly two centuries after the enslavement of Africans began in North America — but smugglers continued plying the Atlantic with wooden ships full of people in chains. Cotton was booming in the South, and wealthy plantation owners needed hands to work the fields.

With Southern resentment of federal control near a peak, Alabama plantation owner Timothy Meaher made a bet that he could bring a shipload of Africans across the ocean, said historian Natalie S. Robertson. The schooner Clotilda sailed from Mobile to what is now Benin in western Africa, where it picked up captives and returned them to Alabama, evading authorities during a tortuous, weekslong voyage.

“They were smuggling people as much for defiance as for sport,” said Robertson.

The Clotilda arrived in Mobile in 1860 and was quickly burned and scuttled in delta waters north of Mobile Bay.

The Africans spent the next five years as slaves, Robertson said, freed only after the war ended. Unable to return home to Africa, about 30 of them used money earned working in fields, homes and vessels to purchase land from the Meaher family and settle Africatown USA.

“They resolved they would build their Africa in America,” said Robertson, who wrote the 2008 book “The Slave Ship Clotilda and the Making of AfricaTown, USA; Spirit of Our Ancestors.” She will speak at the gathering of descendants.

The group formed a self-sufficient society with a chief, a court system, churches and a school that became Mobile County Training School, where the festival will be held. Africatown’s peak population was estimated at more than 10,000. Today, lying about 3 miles (4.8 kilometers) north of downtown Mobile, the unincorporated area has about 1,800 residents.

Meaher was charged with smuggling and faced a possible death penalty, but he was never prosecuted and his family remains prominent. A state park in Mobile bears the family name and Meaher Avenue runs through Africatown.

However, few signs of the original residents of Africatown remain — just graves and a chimney from the home of Peter Lee, or Gumpa, who was appointed chief after its founding.

In front of a church founded by the freed slaves sits a bust of Cudjo Lewis, who was the last surviving African from the last slave ship voyage to America when he died in 1935. Lewis, a distant uncle of Davis whose African name was Kazoola, was the subject the best-selling “Barracoon” by the late Zora Neale Hurston, released last year.

While Africatown was listed on the National Register of Historic Places in 2012, plans to make it a major tourist attraction have gone nowhere.

The closest thing to a museum is a room at the school where Lorna Woods, a relative of Davis, sometimes shows off quilts, shackles and other items passed down through her family. A welcome center was destroyed by Hurricane Katrina in 2005 and hasn’t been replaced; two busts at the site were decapitated by vandals.

More than 240 Africatown residents are suing over allegations of industrial pollution involving an International Paper mill that closed nearly two decades ago, but a judge hasn’t ruled. Little has come of a city study that was released in 2016 with talk of redevelopment.

Displaying the Clotilda at Africatown could be a boost, but the burned remains of the ship haven’t been located.

Wreckage that some thought might be the Clotilda turned out last year to be from another vessel. Investigators in December scoured another, smaller wreck but said they haven’t determined whether it is the last slave ship.

The continuing search for the ship and plans for the upcoming gathering have created new interest among Africatown descendants, and area native Anderson Flen hopes something good will come of it all. Flen, 68, lives in Atlanta, but returns regularly to Africatown and maintains a home there.

“It gives us hope that this history will be sustained and improved upon and captured and passed on from generation to generation,” said Flen.