New York prosecutors have dismissed the charges against a 23-year-old mother whose son was ripped from her arms during a “troubling” arrest by NYPD officers caught on tape.

A judge on Tuesday ordered Jazmine Headley to be released from jail at Rikers Island, where she had been held since Friday. Brooklyn District Attorney Eric Gonzalez had previously announced he was dropping the charges against her. Police charged Jazmine Headley, 23, with resisting arrest and endangering the welfare of a child, among other charges. (NY1 Spectrum News/video screenshot)

“Like everyone who watched the arrest of Jazmine Headley, I was horrified by the violence depicted in the video and immediately opened an investigation into this case,” Gonzalez said Monday. “It’s clear to me that this incident should have been handled differently.”

Several witnesses captured the chaotic scene as Headley was arrested by several NYPD officers at a Brooklyn benefits office on Sunday, Dec. 9. Shocking video shows the young mother on the floor screaming as officers wrestle her 1-year-old son, Damon, away from her.

The clip, which went viral on social media, sparked immediate outrage and calls for the officers involved to be fired.

The chaos unfolded when Headley visited the city’s Human Resources Administration office to resolve an issue with a voucher she needed to pay for her son’s child care. The office was packed with patrons, however, forcing Headley to sit on the floor for several hours, as there were no more chairs available.

Security guards approached and ordered her to stand up. When she refused, they called police.

Gonzalez blamed security for escalating the situation after Headley agreed to leave the premises and accused them of creating “an awful scenario of a baby being torn from his mother.”

Police charged Headley with obstructing governmental administration, endangering the welfare of a child, resisting arrest and trespassing, NY1 reported. She remained jailed Monday because of a warrant for her arrest in New Jersey stemming from a 2016 incident where she was caught riding shotgun in a car with a friend who was found with stolen credit cards. That case was resolved Wednesday in a New  Jersey court when she reached a plea agreement to complete an intervention program, pay about $1,000 in restitution, and do 20 hours in community service, The Associated Press reported.

“The consequences this young and desperate mother has already suffered as a result of this arrest far outweigh any conduct that may have led to it; she and her baby have been traumatized, she was jailed on an unrelated warrant and may face additional collateral consequences,” the district attorney said. “Continuing to pursue this case will not serve any purpose and I therefore moved today to dismiss it immediately in the interest of justice.”

The dismissal of the charges has resulted in a lift on a protective order barring Headley from seeing her son, who was staying with a relative while she was jailed,  according to The Guardian. The mother was released from Rikers without bail Tuesday afternoon.

In a statement, Department of Social Services commissioner Steve Banks said he was “deeply troubled” by the incident and said an investigation had been launched.

The NYPD also promised to a launch a review of the incident, with the police commissioner calling the arrest video “very disturbing.” The two NYPD officers involved have been placed on modified duty pending an investigation.

Meanwhile, a Go Fund Me campaign launched to help Headley pay for child care has already collected over $30,000 in donations. 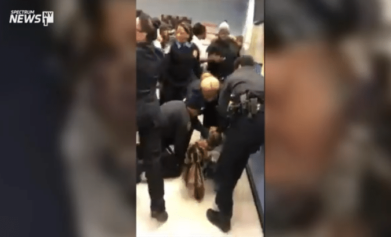