Folks are outraged over a local news station’s attempt to criminalize an innocent victim of a fatal stabbing attack in San Francisco Bay this past weekend.

Nia Wilson, 18, and her sisters were on their way home from a family gathering Sunday night when police say suspect John Lee Cowell assaulted the women in an unprovoked, “prison-style” knife attack on a BART station platform. Wilson was stabbed twice in the neck, killing her. Her sisters suffered minor injuries but managed to flee the attack.

A KTVU Fox 2 News report about the deadly incident featured a photo of Wilson brandishing what appears to be a gun as she smiles at the camera. Critics were quick to call the station out for its blatant “disrespect” of the victim and accused the media of trying to criminalize her. Viewers cried foul after a photo of victim Nia Wilson appearing to hold a gun was featured in a local news cast. (Image courtesy of Facebook)

After some digging, it turns out what Wilson was actually holding was a cell phone case that looked like a handgun.

“The media has been the best and most effective method of spreading propaganda, lies, and stereotypes,” one Facebook user commented. “They didn’t want broad sympathy for her. Their bosses would rather marginalize her humanity than display it.”

“These TV stations need to stop! I’m sick to death of the media’s portrayal of innocent victims,” wrote another. “What was the point of this picture? It was a cell phone case. She was minding her own young business riding a train with her sister and she was murdered for being black. How do we call them out and fix that? They are despicable!” 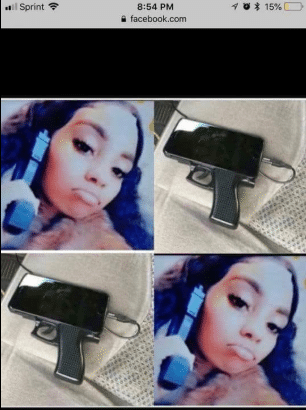 Others questioned why the station chose that picture in particular when there were tons of other photos to use to memorialize the young woman.

“Why not a prom picture, or graduation picture?,” one person wrote. “The level of hate is high that you try to portray this young black woman as being associated with guns rather than show her as being a innocent black woman that was minding her own business enjoying life until someone came and took that from her.”

“What’s worse though is that they depict her this way to portray her as dangerous, when there are tons of pictures of white teenagers holding huge rifles and gun nuts love it,” another commenter chimed in.

Growing outrage over the photo ultimately led the station to issue an apology on its Facebook page.