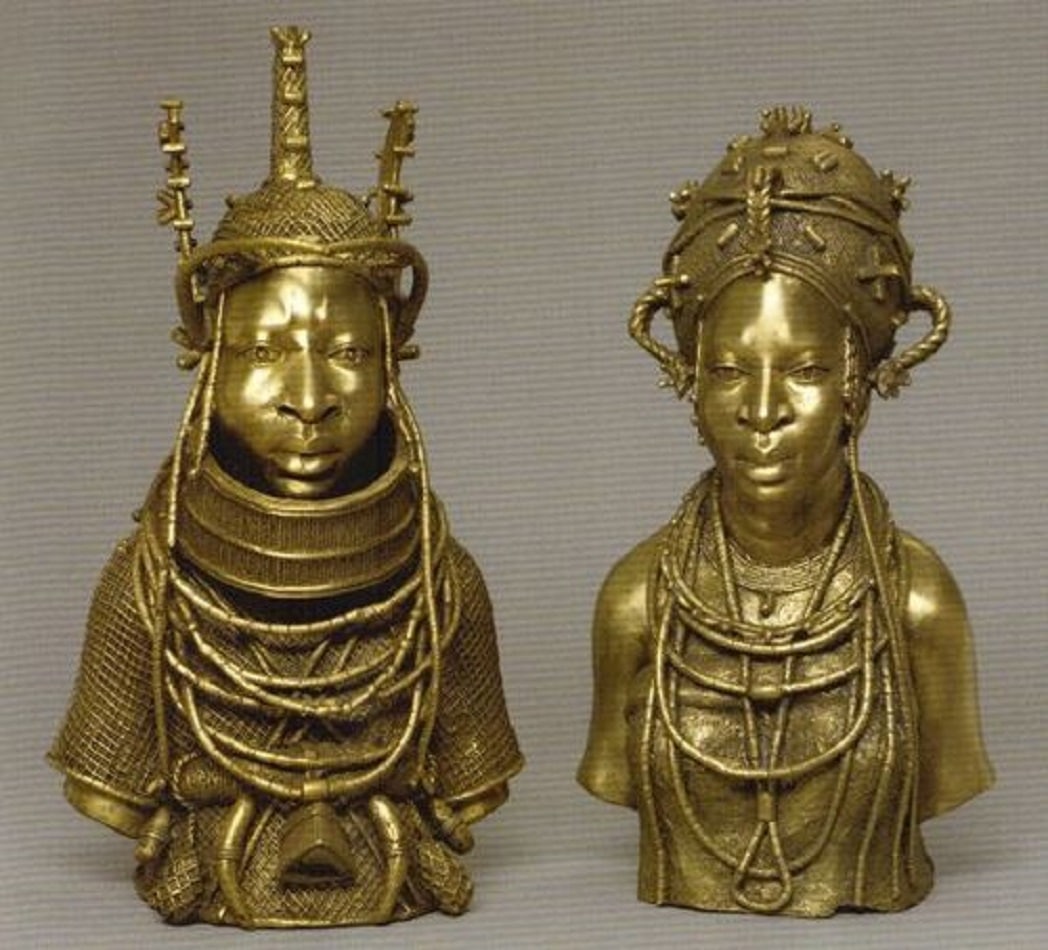 French President Emmanuel Macron has announced he will make returning African art stolen during the colonial era a top priority in his administration, raising questions as to whether other European nations will follow suit. This as African countries endeavor to retrieve these lost treasures from their cultural history. (Photo: Art from the Kingdom of Benin, Tumblr)

The film “Black Panther” broached the subject of the theft of African cultural artifacts by European museums, In the film, the character Erik “Killmonger” Stevens took a “war hammer” from a British Museum and asked the curator, “How do you think your ancestors got these? Do you think they paid a fair price? Or did they just take it … like they took everything else?” The film evokes questions as to when European nations and the U.S. will return artifacts stolen during the rape and plunder that took place during their colonial era. Most of these artifacts originate in the former French, Belgian and British colonies of West, East and Central Africa. French President Emmanuel Macron has signaled that he will make returning African art a top priority of his administration, as Quartz reported.

Benin President Patrice Talon has been the catalyst behind this move by Macron. Talon is calling for the return of cultural treasures and pieces of art that France plundered and looted as a colonizer of the West African nation, and is preserving the Dahomey royal culture with three modern museums. Benin first called for France to return the objects in 2016, followed by a letter sent to then-French President François Hollande from lawmakers and civil society groups from Benin and France. It is estimated that France stole 4,500 to 6,000 artifacts from 1892 to 1894 during the Franco-Dahomean War, including statues, scepters and thrones. These items, which French authorities and missionaries looted, were relocated to French museums such as Musée du Quai Branly and private collections.

The letter also invoked the 1970 UNESCO Convention on the Means of Prohibiting and Preventing the Illicit Import, Export and Transfer of Ownership of Cultural Property. However, the convention — which provides for “the transfer to cultural assets to their countries of origin or for their restitution in case of illegal appropriation” — is not retroactive, and the Kingdom of Dahomey, now Benin, also included parts of Nigeria, further complicating issues of ownership. The French Foreign Ministry had insisted the treasures could not be returned, arguing the “inalienability and imprescriptibility” of the objects that have been in French collections for over a century.

“I cannot accept that a large part of cultural heritage from several African countries is in France,” Macron told a group of students during a November 2017 speech at the University of Ouagadougou in the capital of Burkina Faso. “African heritage can’t just be in European private collections and museums.”

“African heritage,” Macron noted, “must be highlighted in Paris, but also in Dakar, in Lagos, in Cotonou. In the next five years, I want the conditions to be met for the temporary or permanent restitution of African heritage to Africa,” he added, speaking of “the crimes of colonialism” and saying he comes from a generation that does not tell African nations what to do. Macron, who has sought improved relations with countries on the African continent, has appointed Senegalese writer Felwine Sarr and French art historian Bénédicte Savoy to assess how to return artifacts presently in France to African countries.

Talon said the repatriation of these artifacts would allow people “to get to know better our cultural and historic assets” and allow the growth of tourism in the small country. “We don’t have oil, we don’t have gold, but we do have these treasures which aren’t kept here,” one of the letter’s signatories, Beninese lawmaker Orden Alladatin, told AFP. “That’s crucial for the history of the country and the continent.”

Nigeria, like Benin, has pursued the return of their artifacts through diplomatic means. As a result of diplomatic negotiations, the French Embassy in Nigeria handed over to the Nigerian government five Nok Terracotta figures, among the oldest works of art in Africa, dating back to as many as 3,000 years ago, seized by French Customs in Paris.

The British Army looted hundreds of bronze objects from Nigeria’s Benin Empire in a 1897 raid, and the grandson of one of the British soldiers returned two bronze heads in his private collection in 2014. The British Museum still owns most of the bronze objects, and Nigeria continues its pursuit of the stolen artifacts.

“The British Museum is no more than a thieves’ kitchen of plundered African history and treasures and a continual colonial power over African culture,” wrote the African Globe in a 2014 editorial. “That is our history you see there in the museum. That is our culture. Is it any wonder that Africa is the state it is in when our history and culture is on display thousands of miles away in the centre of London?”

There are other examples of ancient objects returned to their rightful owners.  For example, in 2005 Italy returned to Ethiopia a 1,700-year old granite obelisk stolen by troops of the fascist dictator Benito Mussolini in 1937. The obelisk is 80 feet tall and weighs 58 tons. In 2008, France returned over 260 stolen archaeological items to Burkina Faso, including pottery and stone and bronze objects dating from between 1,000 BC and 1,300 BC. In 2012, France returned 20 mummified Maori heads to New Zealand. Artifacts British troops stole in 1868 from the Abyssinian Empire — present-day Ethiopia and Eritrea — are now on display in the Victoria and Albert Museum in London in collaboration with the Ethiopian Embassy in London. The museum has said it is willing to return the items.

In addition, the resolution of Nazi Germany-era plunder of Jewish artwork provides another example of how African nations may reclaim their history. In 2007, a U.S. federal court in Rhode Island ordered the return of a painting stolen from a Jewish collector and art dealer in a forced sale during the Third Reich. In 2017, a federal court in the District of Columbia ruled that descendants of Jewish art collectors may sue Germany in the U.S. for items allegedly taken by duress in Nazi Germany. This marks the first time Germany can be sued under the Foreign Sovereign Immunities Act (FSIA) for the repatriation of looted artifacts under Nazi rule. The American heirs of a German-Jewish family are working with Germany to recover a collection of thousands of sculptures, paintings, books, artifacts and other items stolen by the Nazis. Further, an online database of 20,000 Nazi-looted artifacts enables Jewish survivors, victims and relatives to search for lost property from World War II.

Under FSIA, a foreign state is immune from lawsuits in U.S. courts, with exceptions such as when that state has taken property in violation of international law, and is engaged in commercial activity in the U.S.  Therefore, FSIA is used to recover art, artifacts or other items of cultural value from foreign nations. Further, a number of other U.S. laws are designed for countries to retrieve and stop the flow of stolen cultural property from the U.S., including the National Stolen Property Act (NSPA) — which according to the American Bar Association “requires the country seeking return of looted works to prove they had been stolen within its borders, or that they had been taken after the date of whatever relevant provenance law came into effect.” The Convention on Cultural Property Implementation Act (CPIA) is an American interpretation of the UNESCO Convention and allows the U.S. Department of State to determine how it will follow foreign countries’ restrictions on exported cultural property.

The theft of Africa’s artistic heritage is about preserving culture and history and national identity, but it is also about economics. According to Arts Council England, every £1 ($1.31) the arts and the culture industry pays in salaries generates an additional £2.01 ($2.61) in the greater economy, “attracting visitors; creating jobs and developing skills; attracting and retaining businesses revitalising places; and developing talent.” While some would claim that some African nations lack the infrastructure to maintain the artifacts, others have proposed returning items to Africa without a transfer of ownership, and training of local curation staff and renovation of museums. Some African collectors have endeavored to purchase African art, and donors have sought the strengthening of artistic and cultural institutions in Africa.

“African heritage cannot be a prisoner of European museums,” French President Macron said, suggesting a new era in the repatriation of African culture. Did You Know There Is a Language War Brewing in Cameroon ?