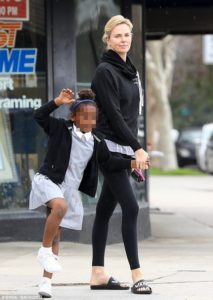 Some critics suggest Charlize Theron is forcing her adopted son Jackson to dress as a girl. (Photo by EVGA/BACKGRID)

Hollywood actress Charlize Theron raised a few eyebrows this month after she was spotted treating her 6-year-old adopted son Jackson to a frozen treat in Los Angeles. Young Charlie was dressed as a girl, however, prompting critics to question her intentions.

Rumors of Theron, who adopted Jackson from her native South Africa in 2012, raising her son as a girl have been swirling for years, but recent photos of the two out and about have proven them true. According to celebrity blog Industry On Blast, Jackson would reportedly act out and throw tantrums about wanting to be dressed as a girl. The misbehavior got so bad that Charlize finally gave in.

Before and after photos of young Jackson dressed as a boy and later as a girl have raised the question “what would you do?” if your child identified as the opposite gender. Several critics disagreed with Theron giving in to her son’s wishes, arguing that he was too young to articulate his gender preferences.

“This is what happens when whites adopt Black children,” one person wrote.

“I feel like this b—h is doing some weird science/social experiment on this kid,” wrote another. “Trying to do the whole nature vs. nurture thing like they did in the ’60’s — which failed. I don’t like it at all.”

There were others who highlighted the importance of Black figures in young Jackson’s life, while others cited the recent deaths of three Black kids after their white adoptive mothers, who had a dark history of abuse, drove their car off a cliff last week. Actress Charlize Theron takes her two kids Jackson Theron and August Theron to a birthday party in Beverly Hills, California on October 30, 2016. Both of her kids wore pink tutus and appeared to be dressed like ballerinas in light of Halloween. August had long blonde hair pinned to his hair. FameFlynet, Inc

Meanwhile, others applauded the actress for supporting Jackson’s decision to identify as he wishes.

“If the child considers himself a female I don’t see what is wrong with that,” said one commenter. “Magic Johnson’s son is CLEARLY transgender and I have seen their journey so I don’t want to judge her.”

“If her son actually feels like a girl or wants to dress in girl clothes, then I think it’s a good thing she’s letting him express himself,” another chimed in. “But the fact that he went from boy’s clothes to wearing raggedy girls clothes looks more like he’s emulating the women he see in his everyday life versus a true identity.”

“I guess we’ll see when he’s in his teenage years.”