The Kenyan girl meeting Jossa Johansson was probably “the most [sic] happiest moment [sic] in your life.”

Jossa Johansson, a Swedish aid worker, has become the subject of online criticism after touting her humanitarian work in a Nairobi, Kenya-area town.

Johansson posted a photo on her now-private Instagram page hugging a young girl from Kibera, one of the city’s informal settlements. While her image was an issue for some, her caption also drew some ire.

“Dear child, you inspire me,” her post said. “You inspire me to be the best person to everyone around me, even my enemies. Because I would never even want this for my worst enemie [sic]. The best thing I could ever dream of is to become successful, to have a big family in a big house in a beautiful country. When I asked you what your biggest dream was, you said ‘to dance…’

“One of the most [sic] happiest moment [sic] in your life was probably when you met me and my friends, and you asked me when I’m coming back. I am sorry to tell you that there is a very small chance that we are ever gonna meet each other again. In two years you are going to meet a grown up man that you have never met before, you two are going to have a child, and then if you are lucky he’s gonna stay with you, but he will probably leave you alone with your child in your small house made of mud and tree’s [sic]. You will probably sell your body to someone else to earn money for your child.

“I could keep on talking, but I just want you to know that there is hope, there is,” Johansson concluded. “Dreaming could be your savior, dreaming could keep you alive. Dear child, keep safe.” The caption led Twitter users to unleash on Johansson and call her out for speaking of racist stereotypes about a young Black girl getting left barefoot and pregnant and promoting white savior stories.

“@jossajohansson your message to a little Kenyan girl tell us a lot about you and the society that conditioned you to think in such a horrible way,” one person said. “What must happened to you to see the world is such a warped light?”

Another tweeted, “@jossajohansson may it be the opposite. May she live to prove your sentiment wrong. #KOT should follow with the development of this #GirlChild & revisit this post years later.”

When another asked where Johansson lives, a Twitter user responded, “Somewhere in ‘let’s use poor Black kids to make ourselves look like caring, non-racist white people’-land.”

“I’m really tired of this White Savior Narrative,” someone said. “Y’all go to Africa and donate a few cans of Progresso past the best by date and take a few Instagram and think you changed the world. Please stop.”

“Very disgusting how some white people come to Africa to just take photos and trash us!!,” one person wrote. “People like Josefine Johansson (@jossajohansson on IG) should be banned from ever stepping foot in Africa leave alone Kenya!!”

In response, Johansson edited her caption and explained she “didn’t mean that part of the text like that was exactly what her future would look like.”

Still, she continued to pat herself on the back.

“And in a way, I could actually be a little hero,” she wrote. “Compare [sic] to many of you who commented today.”

She added she’s given “water, food, money, and clothes” during her “journey” as well as “spread the knowledge of human rights and spread hope to people living in the worst conditions.”

And she also slammed accusations of racism “because I’m not f—ing a racist, if I had been racist I would never have gone to Kenya and helped so many people.”

That statement didn’t go over well with Twitter users.

She’s probably also used the statement when someone’s said she’s racist : I can’t be racist I have a friend that is etc. 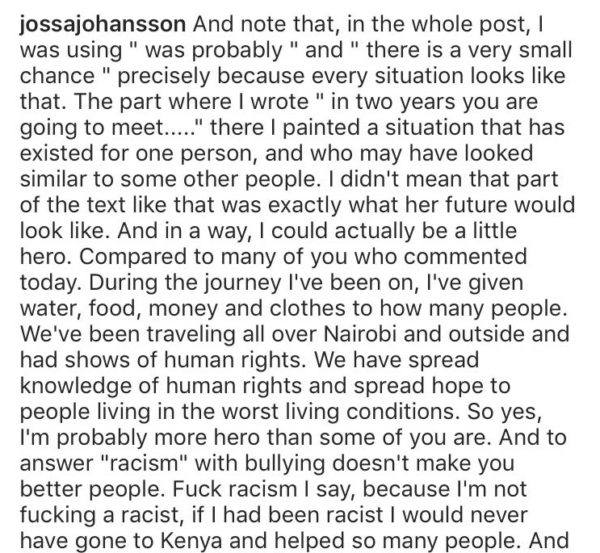